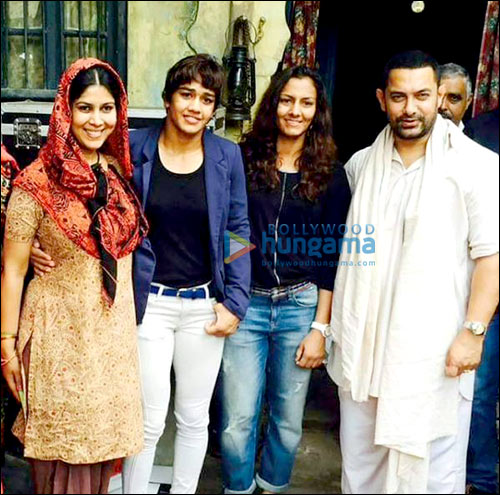 Aamir Khan has been trending currently, courtesy the first look of his upcoming wrestler film Dangal that was released recently. The actor will be playing this role as well as the role of a father of teenage girls for the first time on screen. Now, recently yet another picture that has been doing the rounds on the web is that of him posing with his co-star Sakshi Tanwar and the Phogat girls.


The film is based on real life wrestler Mahavir Phogat and the actor was seen interacting with the daughters of the wrestler, Geeta and Babita who are also women wrestling champions. Earlier we had also reported that popular TV actress Sakshi Tanwar will be playing the role of Aamir Khan's wife in Dangal. The film has also been garnering attention over the bulky avatar that the superstar will be sporting in the film.


Produced by Aamir Khan and UTV - Disney, Dangal also stars a handful of debutants like Suhani Bhatnagar, Zaira Wasim among others and is slated to release on December 23, 2016.