Megastar Amitabh Bachchan has acted in several films and his father Harivanshrai Bachchan was a popular writer. But did you that the renowned poet and Amitabh’s social activist mother Teji Kaur Bachchan came together in a film and that too they featured together in an Amitabh Bachchan film? Well, the hint is the film is considered to be a cult romantic drama by Yash Chopra. 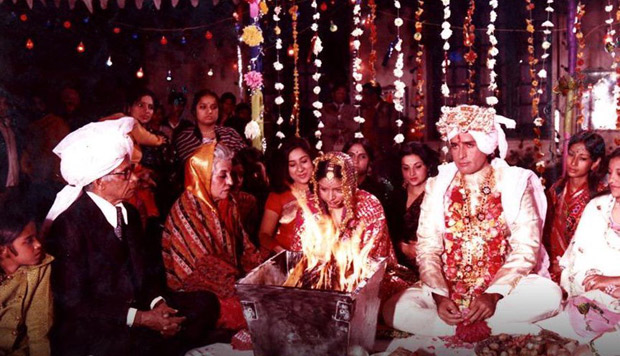 Some readers would have guessed by now that the film in question is Kabhi Kabhie. The film featured a scene where Rakhee is tying the knot with Shashi Kapoor in a traditional Indian ceremony and the picture was clicked during the same. During the nuptials, we see Harivanshrai Bachchan and Teji Bachchan sitting beside Rakhee as they perform the marriage ceremony in this photo. They were seen as Rakhee’s parents and are even seen doing her Kanyadaan in the film.

It seems that the picture featuring this crucial scene from the film has been doing the rounds of social media of late. It is also interesting because Kabhi Kabhie completed 43 years this year.

#43YearsOfKabhiKabhie. Did you know #AmitabhBachchan's parents Mr. Harivansh Rai Bachchan & Teji Kaur Bachchan were the parents of Rakhee in #KabhiKabhie? Here is that scene, where they enacted Rakhee's parents. pic.twitter.com/32Gk6wjDIf

For the uninitiated, Kabhi Kabhie is considered to be an all-time romantic drama featuring Rakhee and Amitabh Bachchan who fall in love with each other during their college years. But they decide to sacrifice their love for their parents and go on to marry Shashi Kapoor and Waheeda Rahman respectively. As the film spans generations, the next gen features the love story of Neetu Kapoor and Rishi Kapoor and their trials and tribulations.

Known for some melodious tracks, the title track ‘Kabhi Kabhie’ is considered to be one of the evergreen classics even today.

Also Read: FLASHBACK FRIDAY – In the fond memory of Sridevi, here’s a rare THROWBACK picture of the actress with Salman Khan and Rajinikanth