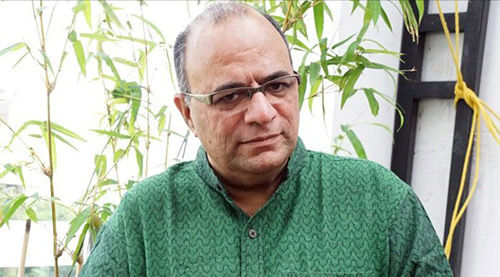 'The way the pirated footage of the film Mohalla Assi is being circulated, it appears to me that it is an attempt to sabotage the film and mar its prospects by vested interest and polluted minds. Whatever is shown in the pirated "collage of abuses" is to misguide, enrage the audience and create an atmosphere of unrest among its viewers.

I also watched this pirated footage like any other viewer when alerted by a relative.

The protagonist of the film, Dharmanath Pandey, is a Sanskrit Scholar who teaches "Vedant". He also sits on Ghat of Assi in the mornings to attend to pilgrims visiting Banaras and offer them "Ganga jal". Dharmanath Pandey is a crusader against the cultural pollution that is slowly spreading in Banaras. Protecting Sanskrit and Sanskriti are his main concerns. He is caught between sweeping changes that are happening in the country post liberalization and his personal crisis.

India is going through times of turbulence. The agitation for Ram Janma Bhoomi has started getting momentum. Nationalist parties and Nationalist social forces are emerging strongly and successfully on political and social scene. In this social and political back drop - Mohalla Assi is a unique and interesting story of Dharmnath Pandey, a popular tea shop known as "Pappu ki Dukan" and some other interesting characters.

It is poignant tale of how culturally conscious people, trying to live with righteous means and trying to protect traditions and cultural heritage, are being marginalized and struggling for their existence and on the other hand those who spare no foul means and are becoming successful.

The story of Mohalla Assi revolves around the cultural degradation that it is threatening present day Banaras and issues that needs to be looked into.

Apart from Dharmanath Pandey there is a crafty and clever tourist guide and an unsuccessful barber in prominent roles in the film.

There is also an important character of "Bahurupiya" in the film. This Bahurupiya impersonates himself as Shiv and earns his livelihood by getting himself clicked with foreign tourist for a price. He constantly fights with Dharmnath Pandey as Pandey is against his way of living by impersonating Shiv for his livelihood. It is an interesting plot in the film that how they come to accept the realities of their existence and time.

The 'Shiv' that is seen in the illegal footage on social-media is not Lord Mahdev, but an imposter -a Bahurupiya- impersonating as Shiv who travels from one Ghat of Banaras to another Ghat in search of his livelihood.

The film raises big questions that will India have its cultural and spiritual identity intact if Shiv and Shivatv is displaced from Banaras?

Mohalla Assi is an emotional story of the displacement of Shiv from our heart and our life. In a time of crisis of faith will India arise to save - India?

India will survive only If Sanskrit and Sankriti survives. Does answer lie in looking for Synthesis? Mohalla Assi is story of the Cultural and Spiritual capital of India - Banaras and its one Mohalla Assi I myself am as pained and surprised by this illegal misguiding 'trailer' on the social-media, as any proud Indian would be. I have taken the matter with the cyber cell to reach to the roots of this leak. It also seems to me that this is a deliberate attempt by vested interests to malign me and my social & cultural allies.

The matter regarding unlawful piracy and uploading movie images on social Media is under police investigation and I am looking forward see that this issue is taken its logical legal end.'

Meet Saher Bamba who will make her debut…

Sunny Deol has the cutest WISH for Karan…