This weekend was all about the glitz and glamour as Bollywood celebrated the best performances of 2018 at 64th Vimal Filmfare Awards. The said Filmfare Awards 2019 was held in Mumbai and many actors walked away with the black lady this evening. Amongst them was newbie Sara Ali Khan, who won the Best Actress [Debut]. It was obviously a proud moment for the actress and she even expressed her happiness on social media. 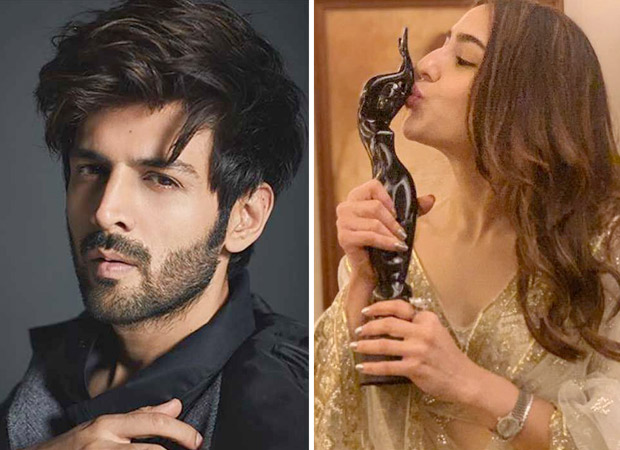 The evening of Filmfare Awards 2019 saw Sara Ali Khan winning the best debut for her performance in the Sushant Singh Rajput starrer Kedarnath. The excited actress shared a few photos of her with the black lady wherein she thanked Filmfare as well as the team of Kedarnath for the award. She said, “Thank you Filmfare for giving me this honour- being able to kiss the black lady is truly surreal Team Kedarnath this one is for each and every one of you. Thank you for making my dream come true Jai Bholenath.”

But what attracted attention on the post was the comment made by her co-star Kartik Aaryan. Well, we all know that Sara Ali Khan had expressed that she would like to date the actor on the show Koffee With Karan 6. The actor too had responded to the same saying that he would like to take her out for a coffee. Referring to that comment, he commented on Sara’s picture saying, “Ab toh coffee se kaam nahi chalega, Dilli mein party karte hain.” 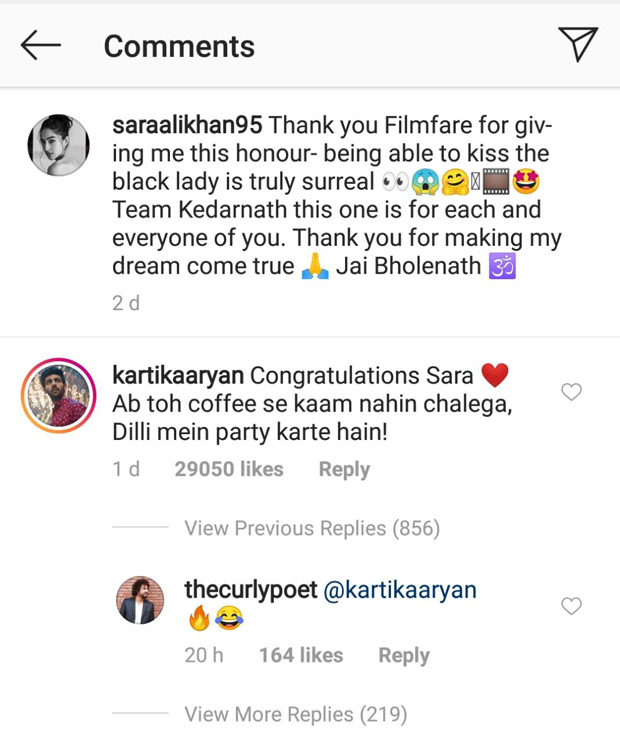 Readers may be aware that Sara Ali Khan and Kartik Aaryan are shooting for Imtiaz Ali’s next in Delhi. The two actors are paired romantically in this film which is said to be Love Aaj Kal 2. The prequel Love Aaj Kal featured Deepika Padukone and Sara’s father Saif Ali Khan in lead roles. Going by the recent pictures from the sets of the film, it seems that Dilli celebrations of Kartik and Sara have already begun!

Also Read: LEAKED PHOTOS & VIDEOS! Sara Ali Khan and Kartik Aaryan have eyes only for each other on Love Aaj Kal 2 sets