This year’s Filmfare Awards was lot more than just an award function as there was romance written all over. The most talked about couples Ranbir Kapoor and Alia Bhatt as well as Deepika Padukone and Ranveer Singh were more than happy to showcase their feelings for their respective partners on stage. The newlyweds DeepVeer sent their fans into a tizzy when the actress kissed her doting husband on stage at the recently held 64th Vimal Filmfare Awards in Mumbai. 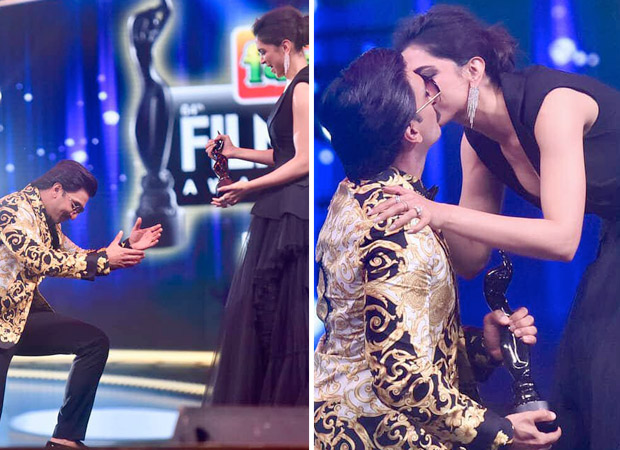 Deepika Padukone was called on stage to present the trophy for her husband Ranveer Singh. The latter won the Best Actor (Critics) award for his powerful performance as Alauddin Khilji in the blockbuster Padmaavat in the recently held Filmfare Awards 2019. The film, interestingly, featured Deepika Padukone too in the role of the queen and as the leading lady. So when the actress went on to stage to present the award to her actor-husband, she was merely surprised to see him go down on his knees.

Ranveer Singh, who is setting the goals high for millennial husbands, received the award from the actress for Padmaavat, albeit in style. He took the award by going down on a knee and what he didn’t expect was the reaction of his wife that followed. Deepika, who has always been inhibited about sharing her feelings, was so happy by the gesture that she kissed him on stage. Not surprisingly DeepVeer fans were thrilled to catch this lovable moment of the couple.

Since then, fans can’t stop talking about the DeepVeer love on social media. They even shared this video and photos of the couple on their Instagram pages and other social media platforms.

On the work front, Deepika Padukone has turned producer with Chhapaak, a film based on the life of acid attack survivor Laxmi Agarwal. As for Ranveer Singh, he is currently busy with '83 based on the 1983 World Cup. He will also kick off the multi starrer Takht soon. The actors are yet to announce if they will be coming together for any film soon.