For a few months actors Kangana Ranaut and Arjun Rampal were shooting in the European city of Budapest for their action drama movie, Dhaakad. Arjun Rampal had also taken along girlfriend Gabriella Demetriades and son Arik along with him to have a mini vacation amidst the shoot. After shooting for a few weeks Arjun has finally finished his portion and celebrated by opening champagne and officially wrapped the shoot. The cast and crew came together to give a farewell to the actor and celebrated his last day on the set. Bollywood queen Kangana Ranaut who stars opposite Arjun Rampal in the film also joined the celebrations and snapped the picture of Arjun blowing up the champagne bottle and declared his portion to have wrapped up. 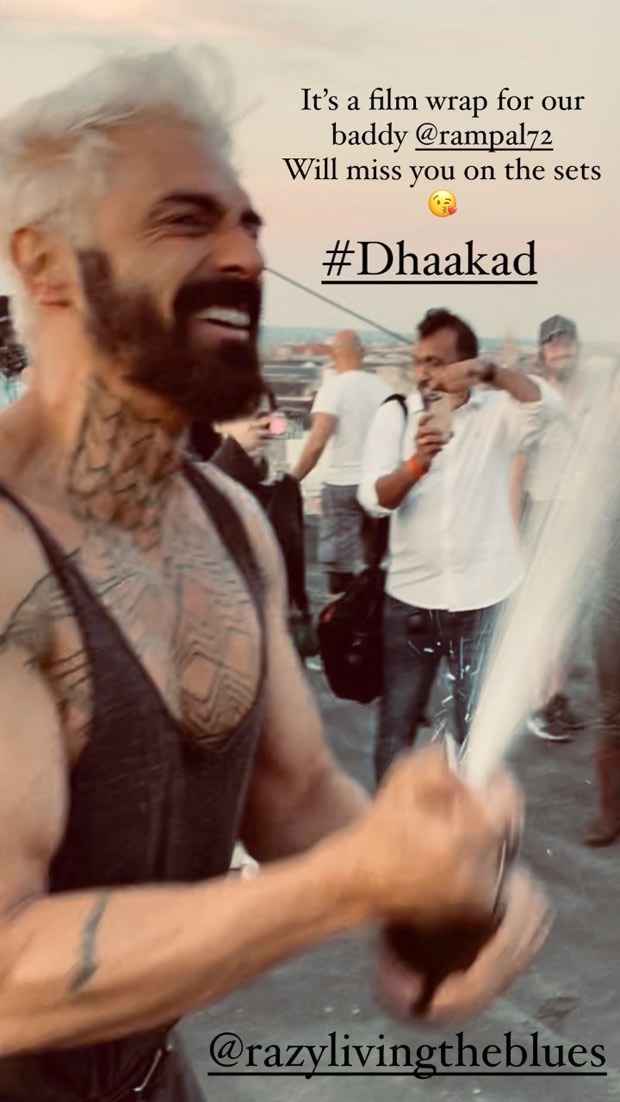 Kangana posted the picture on her Instagram story and wrote, “It's a film wrap for our baddy @rampal72 Will miss you on the sets". She expressed that she will miss her co-star around the sets as he has finished his part. Arjun is seen in a black vest, blonde hair, heavy beard with various tattoos all over his body parts in a muscular figure popping a bottle of champagne excitedly. The team members can be seen around him taking a snap of his actions. The 48 year old actor seemed happy and content as he finally ended shooting in the international location.

Arjun also bid adieu to the film’s shoot by thanking director Razneesh Ghai by uploading a picture on Instagram. He penned a note and wrote, "Brothers in Arms. What a pleasure @razylivingtheblues what an experience. Thank you. Kiddo. Love and till we meet again #dhaakad."

Dhaakad is an action drama starring Kangana Ranaut and Arjun Rampal in pivotal roles, directed by Razneesh Ghai and produced by Sohail Maklai.