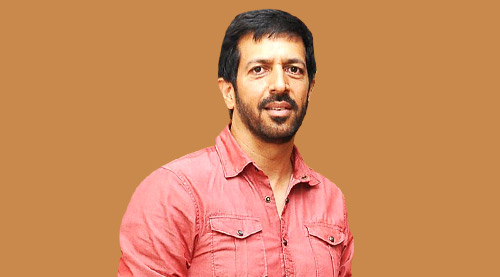 He announced his arrival with a meaningful Kabul Express. He made a very strong statement with New York that went on to be a commercial success too. He then entered the Blockbuster commercial arena with Ek Tha Tiger. Now with Bajrangi Bhaijaan, he is attempting to bring in a meaning into Blockbuster commercial arena while also trying to make a strong statement. We get chatting with Kabir Khan, the man who has put together a Salman Khan film which aims to bring in all that his fans want, and yet offers them something which is unexpected.

Bajrangi who is also a Bhaijaan - The magic lies in the title, right?

In some ways, the title is very important. It wasn't there to begin with; it came through when we were developing the screenplay. It is a highly emotional title due to a very intriguing combination of words. It is the soul of the film.

How did the whole concept come across though, which is that of a Hindu helping a Muslim girl and travel all the way from India to Pakistan?

After completing Ek Tha Tiger, I met V. Vijayendra Prasad, who is a huge writer from the Telugu film industry. His inspiration was from some newspaper headline that he had read. He gave me the story idea and I fell in love with the very basic germ of it. I knew that I had to do it, so I took the story from him and started work on the screenplay.

It must have been an effort to bring in meaning to a commercial tale, right?

It came very organically in the film when I was writing it. What I really liked about the whole set up was that it warranted a combination and balance between humor and emotion. This is what makes the screenplay very special due to intermingling of smiles and tears.

Was it like a challenge for you to present Salman Khan in a different light, considering each of his last seven 100 crore hits, including your own Ek Tha Tiger, has been an out and out action affair?

See, the easiest thing for me would have been to make Ek Tha Tiger 2 with Salman Khan. It would have been sold before release itself. However, another action film with Salman didn't excite me for our next collaboration. I kept telling him that I would approach him when we both are equally excited about a subject. Making an action thriller would have been a no-brainer, but a subject like Bajrangi Bhaijaan is a perfect vehicle for us to collaborate. Also, I wanted to do a film with Salman only if he was excited enough. When I narrated it to Salman, he jumped on to it as he understood the tonality of the character.

On the other hand you also have a kid Harshaali Malthotra in the film. How did you find her for the film?

That was the most challenging casting of the film. We knew that if we didn't get the kid right, the film won't work. Hers is a very important role and hence we did a huge nationwide hunt. We would have auditioned around 1000 girls from Mumbai, Simla, Delhi and Kashmir. We even sent scouts to Tehran and Kabul since they have outstanding child artists. Later, we found Harshaali in Delhi. She is a six year old bundle of talent. This is her first film though she has done an ad or two before. We did a one month long workshop with her.

As an actress, what's the kind of spark she has shown for the film?

Working with a child is not easy, and in this film, she has a very big role. She is practically there on the sets every single day. She was traveling with us in mountains and deserts. She has done an absolutely fantastic job and moreover, looks million bucks too.

Then of course there is Mr. Reliable, Nawazuddin Siddiqui, in the film. How does he add on to the film's appeal? I remember him making such a mighty impact in New York. Was it a given there and then for you that the two of you would be working together again?

Yes, we do go back to New York. That is the first film that got him noticed; he got so much of attention in his five minute role. He is a lovely guy to work with and I have a great relationship with him. Unfortunately, Ek Tha Tiger and Phantom didn't have role for him. However, when I found this awesome character in Bajrangi Bhaijaan who also has a very significant part to play in the narrative, I knew that Nawaz was the only one who could do it. He too jumped on it because he knows that as a Pakistani reporter, he is one of the most exciting parts about Bajrangi Bhaijaan.