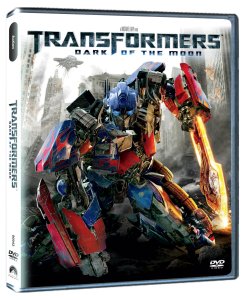 Michael Bay returns with the third installment in the Transformers series with Transformers: Dark of the Moon. However, unlike his earlier 2 Transformers films, this one was released in 3D as well during the American Independence Day weekend earlier this year.

The battle between good v/s evil (read Autobots v/s Decepticons) continues in the third film of the Transformers series. The film opens with a spacecraft from Cybertron leaving the battle between Autobots and Decepticons midway and landing on the Moon. The initial reels also depict the historic moments when Neil Armstrong landed on the Moon and how the NASA detected the presence of this strange ship on the Moon.
Meanwhile in present day Autobots are working in tandem with the NEST (Networked Elements Supporters & Transformers) to detect any unusual activity involving the Decepticons. Our boy hero Sam Witwicky (Shia LaBeouf) is on the look out for a job after finishing his college and simultaneously trying to settle in with new girlfriend Carly (Rosie Huntington-Whiteley). After a few frustrating round of interviews, Sam finally gets a job with a technology film only to realize later that it's a recommendation from Carly's billionaire boss Dylan (Patrick Dempsey) which landed him the job. When the death of a mysterious co-worker who was associated with the Mission to the Moon takes place, Sam realizes that all is not well. He tries to explain his findings on the Dark Side of the Moon to the team at NEST but is quite rudely neglected by Secretary of Defense Mearing (Frances McDormand). Meanwhile we come to know that the spaceship which went missing carried the body of the great Autobot leader Sentinel Prime and the NEST immediately sends Optimus Prime to the Moon to bring back the veteran leader. While Optimum does manage to revive Sentinel through the Matrix of Leadership, it proves to be a costly move as the old warhorse changes sides and joins hands with Decepticons' leader Megatron. While Sentinel thinks joining hands with Megatron will result in giving their race freedom, the Decepticons have other intentions. Needless to say before Sentinel understands the real motive of Megatron, it's too late and the Decepticons are all set to conquer Planet Earth. How our boy wonder Sam Witwicky once again helps in saving the world at large from complete catastrophe with the help of his loyal Autobots such as Optimus Prime, Bumble Bee and the likes of Major Lennox (Josh Duhamel) and Agent Simmons (John Turturro) forms the crux of the story

While the story is decent as compared to the second film in the Transformers series, Michael Bay focuses more on heavy duty action which has been his forte. The climax sequence which lasts almost an hour, has mind-boggling VFX especially the shot in which a python-like Decepticon strangles a glass skyscraper by wrapping itself around it. Even the freeway sequence when Sam is attacked by Decepticons is quite spectacular and you look with disbelief at how the action sequences would have been executed.

Of the cast Shia LaBeaouf is his usual goofy self, Rosie Huntington Whiteley lacks the charm and sex appeal of Megan Fox from the earlier Transformers films, Patrick Dempsey plays his part quite well, while Josh Duhamel too goes through the motions. The one actor who brings in the laughs in this action extravaganza is John Turturro.

The film's duration is 148 minutes

When you have a Michael Bay film, you look forward with bated breath to the Special Features section especially the Making of the Film. However unfortunately the DVD of Transformers: Dark of the Moon comes with no special features whatsoever which is downer. The makers plan to release the Blu-ray 3D DVD later which will be loaded with bonus features. That we are sure will be worth its weight in gold.

Transformers: Dark Of The Moon is a visual treat for fans who don't mind seeing heavy-duty action sequences with some mind-boggling VFX. It's also a fitting finale for the series which has been thoroughly entertaining. However, if the making and special features had been included it would have made this an even better buy.

Bollywood to get its next big market- China