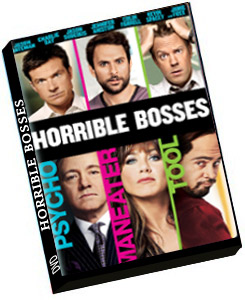 If you haven't yet watched Horrible Bosses, you need to run to your nearest DVD store and grab hold of this DVD pronto. Why? Well cos simply put it's among the funniest films seen in years.

The film tells the story of 3 close friends Nick (Jason Bateman), Dale (Charlie Day) and Kurt (Jason Sudeikis) all of whom have one problem in common- their bosses suck. Nick has been working overtime at his company for a hard-earned and much deserved promotion only to find out that his shrewd and conniving boss Harken (Kevin Spacey) has other plans up his sleeve. Meanwhile Dale, an assistant to a dentist, is happily in love with his fiancÃ© but faces a tough time at work as his boss Dr. Julia (Jennifer Aniston) is a sex-obsessed maniac who keeps flirting with him making him feel extremely awkward. Kurt meanwhile has a dream job of sorts at a chemical company but when the owner Jack Pellitt (Donald Sutherland) dies all of a sudden, Kurt is left to deal with the new boss, Jack's coke snorting, arrogant son Bobby Pellitt (Colin Farrell). Fed up with their bosses' torture, the trio decides to do the unthinkable- murder their bosses. What follows thereafter is a hilarious joyride where the trio encounters a series of mis-adventures while fulfilling their mission.

Director Seth Gordon comes up with a hilarious script that abounds in plenty of LOL moments. The way the trio comes up with silly and stupid ways to knock off their respective bosses is too funny. Also equally funny are their interactions with a small time video pirate Dean 'MF' Jones (Jamie Foxx) whom they presumably mistake to be a seasoned hit-man.

As far as performances go, the trio of Bateman, Day and Sudeikis are all superb in their respective parts but if you have to pick one its Charlie Day who stands out delivering some of the funniest lines in the film. His comic timing is simply impeccable. Jennifer Aniston is seen in a totally new, hot, and sexy avatar and plays her part superbly. Colin Farrell is perfectly cast as the eccentric Bobby Pellitt while Jamie Foxx is too good as Dead 'MF' Jones. Kevin Spacey as always is reliable.

The film's duration is 94 minutes

Deleted Scenes: The deleted scenes section is a laugh riot and even includes an alternate opening sequence of the film. One wonders if it would have enhanced the impact even more had some of these scenes been included in the film

Horrible Bosses is a gem of a film that shouldn't be missed. It's rather unfortunate that the film had a very selective theatrical release in India. Nevertheless a film like this can be enjoyed equally on DVD (home-viewing) as well. If you are in the mood to laugh your guts out, check out Horrible Bosses and you won't be disappointed.