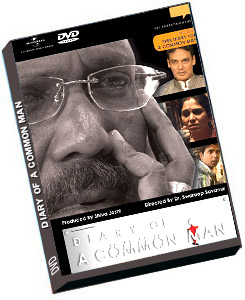 A good idea that could perhaps have been scrapped on paper itself - This is what turns out to be the case with Diary of a Common Man, a short film that was released directly on DVD. With a catchy title, impressive DVD layout and an epitome of a common man, Virendra Saxena, at the helm of affairs, one expected a different take on affairs through this film which carries a tagline of 'aam aadmi ki jeet'.

Alas, but what one gets to see is hardly a story that makes you confident about taking the system heads on. Instead, it only ends up depressing you further and feel pity about the times that we live in.

This is what director Dr Swaroop Savanur conveys through the duration of the film as he reminds audience of 'over 64 years that have gone by ever since the country became independent. With Virendra Saxena, a middle class man, struggling to pay fees for admission of his only son (Adhyay Bakshi) into a medical college, it is the youngster himself who aims at bringing on a revolution through street plays and expose corruption. On the other hand, the old man has his own dreams and intends to bend his back as much as possible so that there is no roadblock ahead in his son's life.

The film ends up playing on clichÃ©s and has the kind of production values that could well be comparable to a poorly slotted Doordarshan serial from the early 80s. Leave aside the technical aspect of the film, right from the sound design to cinematography and general editing; the film just doesn't manage to hold your attention for even five minutes at stretch. In fact it only ends up pulling you away from it with every passing episode, hence alienating you entirely by the time finale arrives. That too, with Virendra Saxena confronting a Minister is executed in such an ordinary manner that you just wish for the end credits to start rolling.

As for performances, Virendra Saxena is of course natural while Adhyay too gives a good account of himself as vulnerable young man. It would be good to see him getting opportunities in years to come. Bharti Patil, as Saxena's wife, is decent as well and so is the man who plays the Minister.

The film's duration is 55 minutes

- Making of the film & Street Play

With the film itself hardly managing to hold your interest, it is futile to expect the 'making' segment managing to do anything on the contrary.

DVD jacket says that this is first in the series of Diary of a Common Man with the subject of 'Commercialization of Education System' being explored. If the first installment is anything to go by, the makers may well give it all a rethink before attempting second in the series.