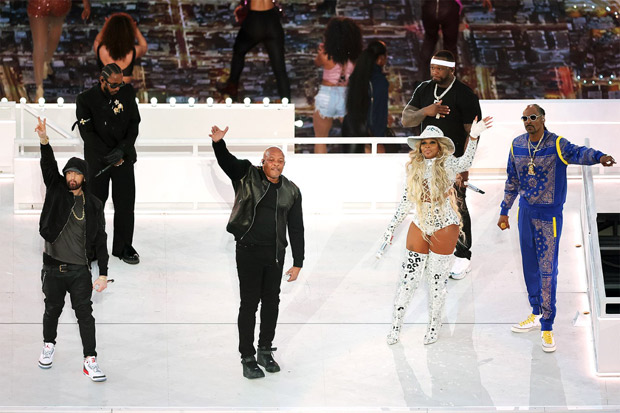 According to publication People, the SoFi field was seen covered with the Los Angeles city grid and a row of white buildings as the show took off. Rappers Snoop Dogg and Dr. Dre opened the show together with their song "The Next Episode" then segued into “California Love,” 2Pac’s mid-’90s Dre-produced smash that shouts out Watts, Compton and Inglewood.

The rappers’ thrilling performance was followed by surprise appearance of 50 Cent who kicked off performing "In Da Club" hanging upside down before descending into a bevy of female dancers in a faux party scene.

Then entered Mary J. Blige dressed in all white and sequins singing another Dre-helmed hit, the low-slung “Family Affair” where she was accompanied by sparkling background dancers, who later disappeared while she sang "No More Drama" solo.

Eminem then took things back up top again in the quick-moving show as he rapped a few lines from “Forgot About Dre” before moving into performing his Grammy and Oscar-winning song "Lose Yourself."

To end the epic Super Bowl LVI show, the six hip-hop performers then gathered together on the top of the center building structure for a swaggering run through “Still D.R.E” with Dre at the piano playing the iconic first notes of his hit.

Deaf rappers Sean Forbes and Warren "WaWa" Snipe were also on hand to perform American Sign Language renditions of each of the songs, marking the first time that the NFL has incorporated sign language performances as part of the halftime show, according to the Detroit Free Press.

This year’s show was the third halftime, after the duo of Shakira and Jennifer Lopez in 2020 and the Weeknd last year, overseen by Jay-Z’s Roc Nation company. Viewers online, including legend LeBron James, hailed it as the "greatest halftime show." Many praised it for showcasing Los Angeles pride and leaning in to nostalgia.

Dr. Dre, who served as the headliner, remarked the show as "one of the biggest thrills of my career." "I'm extremely excited to share the stage with my friends for the #PepsiHalftime Show," Dre captioned a photo of the group in September. "This will introduce the next saga of my career… Bigger and Better than Ever!!!"

The Los Angeles Rams and the Cincinnati Bengals are facing off at Super Bowl LVI on Sunday in Los Angeles. The game is airing on NBC.