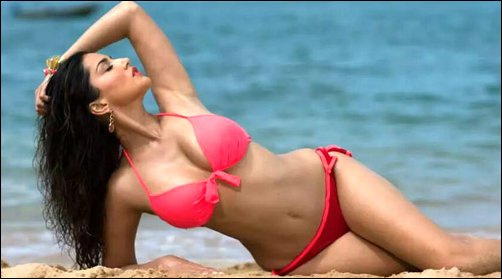 It was raining in the morning and Pattaya sky wore a dark, gloomy look. We reached the beach and the adjacent road was somewhat flooded. Shoes were off and I walked my way through water to the location where a peppy song from Mastizaade was being picturised.

A sprightly Sunny Leone was sitting inside a tent on the beach with Tusshar Kapoor, Vir Das, Milap Zaveri and Rangita Nandy from Pritish Nandy Communications. Seeing familiar faces around with Indian delicacies to gorge on, I was at ease.

Vir Das and Sunny Leone (in her Lilly Lele avatar) danced to a fun number composed by Amaal Malik and written by Manoj Muntashir (of 'Galliyan' fame). Mika has sung it. Bhushan Kumar of T Series has taken a keen interest in the music of Mastizaade and it was he who coaxed Amaal into churning out this cool song apart from the others composed by Meet Bros Annjan and Anand Raj Anand.

Choreographer Mudassar Khan excitedly managed the show. He had been given instructions to shell out a catchy signature step (the man composed 'Dhinka Chika' after all besides many hits) and he seems to have nailed a good one. The rain was gone now and it was bright and hot, with the gorgeous Sunny along with beautiful back up dancers adding to the hotness-quotient.

Sunny Leone is having a double role in Mastizaade (Milap calls it the Baap of all sex comedies). While Laila Lele is a hot tempest that oozes oomph, her sister Lilly Lele is a dorky, nerdy character who elicits laughs because of her goof-ball-antics. Sunny considers Lilly to be closer to how she is in real life. Tusshar Kapoor and Vir Das are paired opposite both the Lele sisters. Vir did the dancing today. He enjoys the song-and-dance Bollywood routine which is somewhat contrary to his stand-up-comic image.

Milap Zaveri is always ready with a genuine smile and a smart-ass one liner. He's enjoying himself and there's a spring in his walk and energy in his talk (see, even I'm getting inspired by his on-the-spot-rhyming-dialogue-manufacturing-skills). Zaveri is unapologetic about writing-directing a sex comedy that will obviously be judged. He likes making people happy and according to him, everyone enjoys adult SMS jokes so people shouldn't be hypocritical. Tusshar Kapoor seconds his director's opinion and adds that one shouldn't judge people or movies. A few actors may have refused sequels of successful sex comedy franchises but Kapoor feels it's "their problem" and on a personal level he doesn't have qualms in attempting different genres of movies.

Sunny Leone has become a very sought after heroine in Bollywood. She's having some really interesting projects lined up and there's a special interest in the songs of her movie especially after 'Laila' from Shootout At Wadala and 'Baby Doll' in Raginni MMS 2. Milap feels that in Mastizaade Sunny Leone is looking as hot as Katrina Kaif in a mainstream film. Leone on her part takes it as a compliment as she considers Katrina to be an extremely beautiful actress.

The sun turned a delightful tinge of gold as the evening approached languidly. The peppy romantic song still filled the air joyously and the cool wind bade the day goodbye to merge in the tranquil night. The diary of Day one of Bollywood Hungama's exclusive coverage of the on location of the song shoot of Mastizaade hereby comes to an end. I shall pen down my thoughts for the remaining two days of this song shoot. Keep watching this space for more. The night has set in, Pattaya has just woken up.