The third installment of the Jurassic World franchise, Chris Pratt starrer Jurassic World: Dominion has shared first look photo of the “fiery, fierce, and ready for a fight" unnamed character of DeWanda Wise. 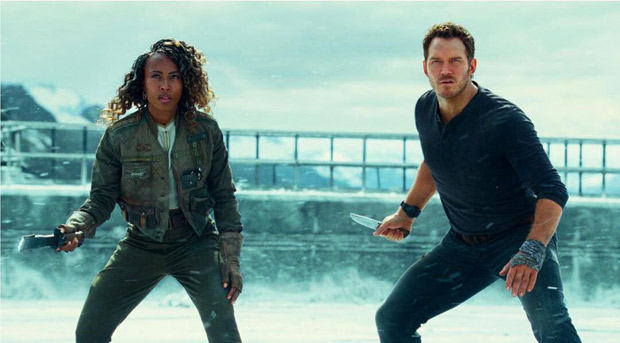 The photo gives the glimpse at its newest star. The She's Gotta Have It actress, 37, is gearing up to face off against some dinosaurs in the latest Jurassic Park movie. In a first look at her currently unnamed character posted by the official Jurassic World Twitter account on Friday, Wise poses alongside co-star Chris Pratt. The two actors are prepared to take on anything that comes their way as they grip weapons and kneel in a fighting stance against what appears to be a wintry landscape. Wise, who wears fingerless gloves, a jacket, and olive pants, looks up at a figure out of frame, while Pratt stands beside her in character as Owen Brady, holding a knife and looking at the same mystery figure.

The Twitter account posted the image with the caption, "Fiery, fierce, and ready for a fight. Welcome to the party DeWanda Wise. #JurassicWorldDominion."

Fiery, fierce, and ready for a fight. Welcome to the party DeWanda Wise. #JurassicWorldDominion pic.twitter.com/4bnus7qMnB

Wise also shared the first look image on Instagram, where she wrote, "She's your resourceful, scrappy, Adventure-loving newest Mesozoic HERO. Can't wait for you to meet her in 5 months." The Jurassic World Instagram account hinted that Wise and Pratt are battling a prehistoric foe in the photo, commenting on her post, "What dino are they facing off with?"