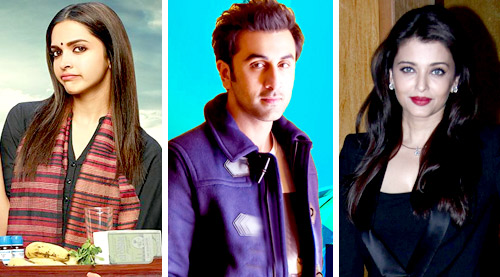 While Ranbir Kapoor and Deepika Padukone come together to create some more Tamasha, Kareena Kapoor Khan too would be serenading Bajrangi Bhaijaan Salman Khan.

Though Shahrukh Khan could well be going solo as his own Fan, there are no surprises in store to see Shahid Kapoor and Alia Bhatt together as a Shandaar 'jodi'. However, it isn't as if

Bollywood would be bereft of its many surprises in weeks and months to come. Thankfully, quite a few filmmakers are thinking out of the box, something that is resulting in many an unconventional

pairings in the making. Let's have a look.

Deepika Padukone has bagged the role of a lifetime in Shoojit Sircar's next. While her camaraderie with Amitabh Bachchan (who plays her father) is being much talked about, one actually waits to see

how she performs with powerhouse of talent, Irrfan Khan. Both of them have gone through a look change for the film and for those hunting for an experiment, this one should do the trick.

This one is still many months away but the moment Aishwarya Rai Bachchan and Ranbir Kapoor share a frame together for Ae Dil Hai Mushkil, it is going to be a 'dhamaka'. A big one at that.

While Anushka Sharma's pairing with Ranbir would have been seen by then in Bombay Velvet, it would be sheer magnificence to see two very good looking people being paired by Karan Johar no

less. We are waiting.

Meanwhile Irrfan Khan is continuing to enjoy the company of pretty ladies, what with Aditi Rao Hydari as his next on-screen partner. In fact the entire set up is pretty unconventional, though

earlier Rakesh Roshan was producing this one. The Delhi Belly director Abhinav Deo is also co-producing the film now, he is yet to give this film a title, rest assured the narrative is

expected to be unconventional due to Irrfan and Aditi coming together here.

As for Kunal Kohli, the man who has made the likes of Aamir Khan, Hrithik Roshan, Saif Ali Khan and Shahid Kapoor run around the trees for his musicals, it is pretty much likely that he would do

the same for himself too with Phir Se..., a film with which he is launching himself as a leading man. Alongside him is the small screen leading lady Jennifer Winget who would finally be

debuting in a Bollywood outing.

There is no doubt about how Sunny Leone and Ram Kapoor would come across as a pair in Kuch Kuch Locha Hai. The pairing is as unconventional as it gets and while Sunny would undoubtedly be

exuding oomph in the part of a filmstar, Ram Kapoor is expected to fit into the part of a Gujarati businessman to the T. One just can't wait to see them get into a song and dance mode, if the

promos are any indication.

Another Sunny who is finding a new leading lady opposite him is Sunny Deol. Soha Ali Khan was a 12 year old girl when Sunny Deol arrived with Ghayal and destroyed the world around him in his

quest for revenge. Now that the film's sequel is arriving quarter of a century later, it would be mighty exciting to see how Sunny (who is also directing the film) and Soha pair up for screen. The

film should also boast of a narrative that is not expected to be unconventional but meant straight for the gallery.

Anushka Sharma had Neil Bhoopalam for company in her home production NH10. While a lot was said, read and heard about the casting changes that took place for this road thriller, the fact

cannot be denied that Neil managed his biggest success till date with NH10. Also, after delivering a triple century with Aamir Khan in PK, Anushka went ahead and pretty much ran the

film on her shoulders with Neil giving her good company.

As for Ayushmann Khurranna, he had to carry his leading lady Bhumi Pednekar on shoulders, well, literally, as he went ahead with his do-or-die effort Dum Laga Ke Haisha. This story of a

mismatched couple was expected to throw in a surprise or two in the first half of the year, and in that aspect it has more than just exceeded the expectations.

Meanwhile, another high profile Yash Raj outing was in the form of Detective Byomkesh Bakshy which made good noise but it eventually turned out to be for nothing. That said, Sushant Singh

Rajput was reliable as ever while Bollywood debutant Swastika Mukherjee found herself well placed in the 40s avtar. A leading lady in Bengali films who is known for her bold image there, she didn't

really go all the way in this film but did leave an impression.

When Divya Dutta started her career with Ishq Mein Jeena Ishq Mein Marna [1994], Varun Dhawan was a seven year old kid. In Badlapur, he shared a steamy lip lock with her who is a

decade senior. The film was just a beginning to many an unconventional pairings that Bollywood would be witnessing in time to come. Perhaps that would bring around the change that Bollywood is