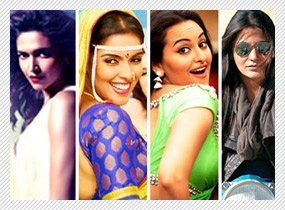 While Khans are involved in a battle of supremacy and Akshay Kumar as well as Ajay Devgn have proven to be tough competition as well this season, somewhere round the corner even leading ladies are having a battle of their own. While competition for Number One position continues to be on between Kareena Kapoor & Katrina Kaif and Vidya Balan is in a space of her own, there are others who would be keeping a close eye on each other's results this winter.

"There has been so much buzz around Salman Khan, Aamir Khan and Shah Rukh Khan bringing their Dabangg 2, Talaash and Jab Tak Hai Jaan so close to each other. Meanwhile Akshay Kumar and Ajay Devgn, who typically release 3-4 films a year, have been active too with Khiladi 786 and Son Of Sardaar. However, no one seems to notice that there are heroines forming their 100 crore club as well and are fighting it out", says an expert.

The heroines in picture are Asin, Sonakshi Sinha, Deepika Padukone and Anushka Sharma who would see a film of theirs release in quick succession.

"Asin was in fact the first heroine to enter the 100 crore club with Ghajini. She now has four to her name already and is looking all set for fifth with Khiladi 786. Sonakshi Sinha too has a great record and is just one behind with three centuries to her name. Rest assured, she would make it four now with Dabangg 2. On the other hand, Anushka Sharma is a recent entrant with Jab Tak Hai Jaan. It would be interesting to see if she manages to make it a double bill with "Matru Ki Bijlee Ka Mandola", a trade analyst adds.

The one who is surprisingly waiting to gain an entry is Deepika Padukone. Though she has number of successful films in her kitty with Cocktail showing a new facet of hers as an actor, her wait for a 100 crore starrer has been a little longer than her peers. "She should get that with Race 2", the analyst continues, "The film benefits from being a sequel and Deepika is looking hotter than ever. Moreover her Chennai Express should do the trick as well."

While that seems a little far away, next two months would pretty much pave the way for the direction that career of these lovely ladies takes in time to come.