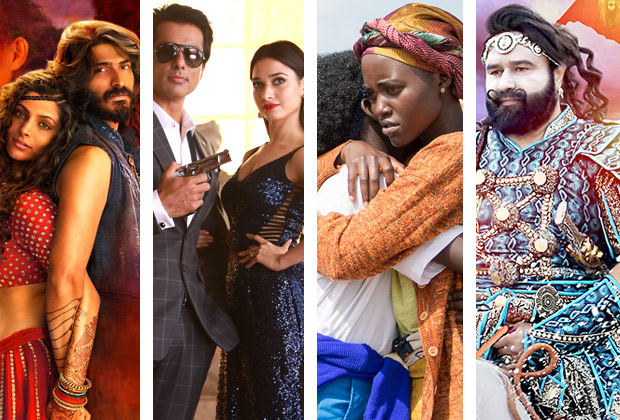 For Dussehra which are the films that you’d like to see? We have Hindi and regional films in overlapping languages clamouring for attention by speaking in multiple tongues. There is the Prabhu Dheva starrer Tutak Tutak Tutiya.

Says Prabhu Dheva, “We shot the film in three different languages. Every shot was done three times over, and with different actors in each language. While Sonu Sood, Tammannah and I are common to all the three versions the side actors are different in each. So it was like shooting three different films.”

Prabhu Dheva is hopeful about Tutak Tutak Tutiya as it cracks a new genre in Bollywood. The horror-spoof done with limited success in the West by Gurinder Chadha (It’s a Wonderful Afterlife) and The Addams Family.

Director Vijay’s Hindi-Tamil-Telugu lowbrow comedy Tutak Tutak Tutiya (Devi in Tamil and Abhinetri In Telugu) runs shoulder-to-shoulder with Mira Nair’s classy inspirational tale Queen Of Katwe about a real-life female chess champ from the slums of Kampala. Mira has dubbed her film in Hindi as well.

“Though all the character in Queen Of Katwe are black Africans this is really a film for all cultures, and must reach into the remotest towns of India because it says dreams are not only for the rich and privileged,” says Mira.

After the spectacular success of Dhoni The Untold Story last week, the Indian box office looks hopefully at Mira Nair’s Queen Of Katwe as another real-life drama of a small-town sportsperson’s rise to global fame.

But the real biggie this week is Rakeysh Omprakash Mehra’s double-layered love saga Mirzya which blends fantasy and contemporary mythology in a layered narrative about two pairs of lovers from different eras and cultures. Mirzya launches Anil Kapoor’s son Harshavradhan and Saiyami Kher.

Says director Mehra, “The newcomers just fitted into the plot, just like Gulzar Saab’s dialogues and Shankar-Ehsaan-Loy’s screenplay. We got exactly what we wanted. Now we want to see what audiences get of out Mirzya.”

Bringing up the rear is the latest instalment spiritual leader MSG The Warrior Lionheart. The film’s direction is attributed to –and I quote—Baap Beti Ki Jodi, the spiritual leader’s fans are expected to flock for the film.

There are surprises from Bengal and Tamil Nadu , with Srijit Mukheree’s Shakespearean adaptation Zulfiqar and new director Bakkiyaraj Kannan’s Remo, a rom-com about a hero who must assume a female disguise, promising to break the linguistic barrier.

So which film would you like to see this week? Dhoni The Untold Story of course continues to march on.

PS One-word titles with the protagonist’s name are in vogue this year: Neerja, Rustom,Dhoni, Azhar,Remo, Mirzya….

Radhe – Your Most Wanted Bhai will release…