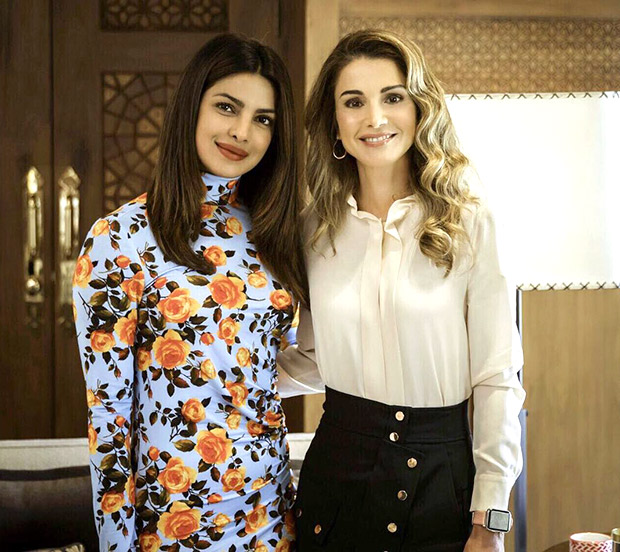 Priyanka Chopra, who was recently in Jordan as UNICEF global goodwill ambassador, met several Syrian refugee families and their kids during her visit. The actress documented her visit to Amman, which is hosting 1,80,000 Syrian refugees.

On Wednesday, before saying goodbye to Jordan, Priyanka Chopra met Queen Rania and felt privileged upon meeting the queen. The queen is known for her work towards education, youth empowerment etc. Sharing a picture with the queen, Priyanka wrote, "I had the privilege and honor of meeting Her Majesty, @queenrania of Jordan again...this time in Amman. It is amazing to see the full extent of support that the Kingdom of Jordan has provided during the ongoing Syrian refugee crises. The numbers are staggering and overwhelming but the good work continues day after day.

Priyanka further praised Queen Raina by saying, "Queen Rania is a true inspiration. Her tireless efforts to help those in need comes straight from the heart and has always been consistent.. as a UNICEF Eminent Advocate for Children, she leads by example as is so evident by the countless programmes for children that she is involved in. She does this all with such grace and calm. The meeting and our discussions, further reiterated my commitment to to help children the world over... because every child matters, no matter where they come from. I'm looking forward to meeting her again at the United Nations General Assembly in NYC next week which we both will be speaking at. Thank you Jordan for the hospitality and I will see you again. To support the work that @unicef is doing, please log on to www.unicef.org #MissionForChildren #ChildrenUprooted."

On the professional front, Priyanka Chopra will soon kick start shooting Quantico’s Season 3. Besides this, the actress has already completed her second Hollywood flick, Isn’t It Romantic which also stars Adam Devine, Liam Hemsworth, and Rebel Wilson. Priyanka Chopra will also be seen in A Kid Like Jake with Claire Danes, Jim Parsons and Octavia Spencer.