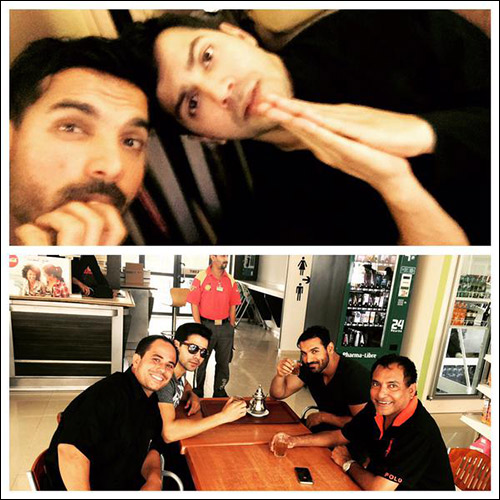 Readers may be aware that after the success of ABCD 2, Varun Dhawan soon took off to join the cast and crew of his upcoming film Dishoom. The actor will be sharing screen space for the first time with hunk John Abraham and actress Jacqueline Fernandez. And now, Varun recently took to Twitter to post about the second schedule of the film.


The actor has already taken off for the second schedule of the film to Fernando de Noronha with John Abraham and even clicked selfies and posted pictures with the crew during their journey. While his first tweet before he went for the trip, read, "Off to shoot the 2nd schedule of #dishoom with @TheJohnAbraham it's going to be one healthy flight waiting on fernando @Asli_Jacqueline", and later he posted pictures during the journey saying, "22 hour journey and we still haven't reached our destination @TheJohnAbraham #dishoom into the desert".


Produced by Sajid Nadiadwala, Dishoom is directed by Varun's brother Rohit Dhawan. This is the first time that Rohit and Varun collaborating for a film.