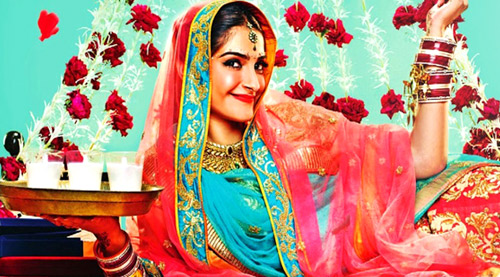 It works on the idea level. A spunky spirited girl who unapologetically cleans up unsuspecting bridegrooms on the wedding night.


And by cleaning up, we don't mean what you think.


There is no sex, not even a kiss. This one helluva feisty con woman, out to take revenge on mankind after being dumped by a guy, is a scare. Hell hath no fury like a woman scorned, they say. Scornfully presumptuous as it rolls up the wedding tent over and over again to facilitate our Dolly's wicked designs (and we don't mean the luscious lehngas and the alluring cholis) Dolly Ki Doli is the sort of cinema where laughter at a social evil (the girl child's lack of options in life) drowns the din of implausibility.


The plot works its way through three episodes, each displaying Sonam Kapoor's vivacious charms in oodles of opulent 'show-sha-giri'.


This is North India where everyone has to be loud and coarse; Archana Puransingh leads the banshee bandwagon. She screams even the punctuations between her lines. And expects laughter for pronouncing 'Bra' as 'Buhraa'. Sonam gets to create humour out of even 'who auraton wali problem' to get away from doing the needful with husband no.2 on her wedding night.

Husband No.2 is played by the cherubic Varun Sharma who was last seen raising a laugh riot in Fukrey. Here Sharma and the rest of the very talented cast must make do with paper-thin wit lining the spoken lines. They stubbornly cling to the hope of humour.


What carries the slim film up that hill to the finishing line are the actors. They all seem to be extra-protective of the flimsy material. The plot about a girl who cons her way through numerous marriages is constantly treading shaky grounds. It's the actors who keep the humour from sagging. Especially good are Rajkummar Rao and Varun Sharma as the two jilted grooms bonding over their betrayal.


There is a sequence where Varun over drunks asks Rajkummar if she gave 'it' to him. Rajkummar pretends to have done 'it'


Male bonding at its most delusional... Mohammed Zeeshan Ayub as the guy who secretly loves Dolly while he must pose as her brother at sham weddings is the only actor who introduced a sense of seriousness to this tale filled with a mocking rage over a social system that doesn't allow a certain section of women to choose whom they want to sleep, or not sleep, with.


What works for Dolly Ki Doli is Sonam in the title role. Sonam's character belongs to the cattle class and yet refuses to be cowed down. Spirited till the end, she plays the film's hero in every respect, owning up to the conning game that men have played from days of Dev Anand in Jaal to Ranveer Singh in Ricky Behl Versus The Ladies.


Why should the boys have the fun? Dolly seems to ask with that mischievous glint in her eyes.


If only the character had been provided with a better place to spread her wings.

Dolly Ki Doli works in parts, those parts where the runaway bride doesn't have to justify her waywardness even to her closest associates.


The take-it-or-leave-it attitude suits Sonam's Dolly fine. It doesn't work for the film, though.


For a film filled with fun festivity and frolic the music and songs including the item song filmed on the queen of the genre Malaika Arora Khan, are poorer for their vapidity.


Incidentally producer Arbaaz Khan was not quite telling the truth when he claimed his superstar brother had no place in this film. Salman Khan not only makes a surprise appearance at the end, Pulkit Samrat seems to be aping the star all through.