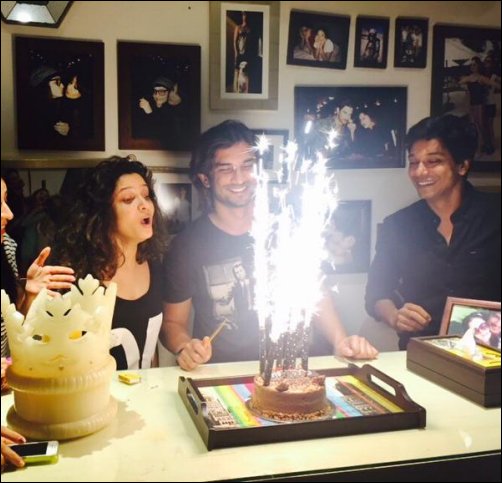 Amidst Bollywood celebrities ringing in their birthday in a lavish way, Sushant Singh Rajput decided to keep it a low key affair. The actor, who is rarely seen socializing, decided to bring in his birthday at his residence along with his live-in girlfriend and co-star Ankita Lokhande and his other best friends.


Popular TV actor Mahesh Shetty took to Twitter to not only wish his bestie Sushant Singh Rajput on the special occasion but also a gave a glimpse of the 'cake-cutting' ritual in the picture posted on the micro-blogging site. Mahesh further tweeted, "Never needed a best friend with u around brother. Happy birthday @itsSSR have a rocking year ahead."


Sushant Singh Rajput started his career in the Indian entertainment industry with TV serials and further moved on to films. In fact, marking the occasion of his birthday, we hear that the trailer of his upcoming film Detective Byomkesh Bakshy will be unveiled on January 21, that is, today. Produced by Yash Raj Films, Detective Byomkesh Bakshy is a suspense thriller based on the popular character by the same name set against the backdrop of Kolkata during the 1940s. Sushant has signed many other projects in Bollywood which includes Shekhar Kapur's futuristic film Paani and the biopic of the current captain of the Indian Cricket team M S Dhoni, directed by Neeraj Pandey.