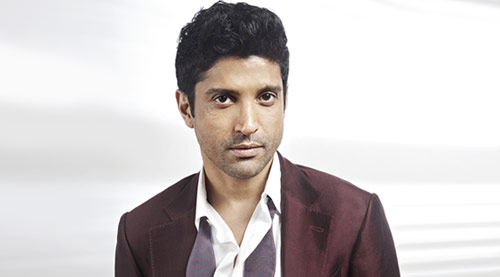 There is a famous adage that says 'If you are a jack of all trade, then, you are a master of none'! Farhan Akhtar is one of the very few people in Bollywood, who has dared to defy that statement and emerge successfully. While many in Bollywood won't tire bragging about their work, Farhan lets his works do all the talking for him. While the last year did not see too much of this man, the year 2015 promises to be 'his year' with two of the mist awaited films of which he is a part of, his production company and its all-time cult film Dil Chahta Hai completing 15 years and many other itineraries which are tucked under his belt!


Satish Sundaresan of Bollywood Hungama caught up with the multi-faceted Farhan for an exclusive interview. Here are the excerpts:


Farhan, to start with, now that the New Year 2015 has started, have you made any resolutions for this year?

I am not a 'resolution' type of person. I feel that it's no important to make any resolution only on the New Year. I personally feel that 'If you have to do it, you just have to do it'. Period.

How is the feeling to be a part of two of the most expected films of this year: Dil Dhadakne Do and Wazir?

I feel very happy to be a part of both these films. These two films are very different from each other. While I am working with Zoya for the third time, it's the first time when I am working with the new team of Vidhu, Raju, Abhijat and Bejoy. It's a new and a learning experience for me at every step. I just couldn't have asked for anything more.

What's the film Dil Dhadakne Do all about?

I really can't talk too much in detail about the film. In all honesty, the prerogative to discuss anything and everything about the film lies with the film's makers. Only when they give us the green signal, will I be in a position to talk about the film and all the questions pertaining to the same. All that I can say right now is that I play a crucial part in the film. And there is a certain kind of involvement of my character's with that of Priyanka's character in the film. Beyond that, I can't tell anything!

What's your character in the film?

I play a journalist in the film who arrives at the cruise vacation, which everybody is on.

Are you the turning point of the film?

Satish... understanding that I cannot tell anything right now; you are pressing all the right buttons to find out more! (laughs).

OK Farhan! At least tell us if you are the 'Dil' or the 'Dhadkan' in Dil Dhadakne Do?

I am actually the 'Do' in the film (laughs heartily).

How has the music of Dil Dhadakne Do shaped up?

I personally feel that the music of Dil Dhadakne Do is a 'complete album'. In simple words, the album is what one would term as a 'very classical mainstream' Bollywood soundtrack album. Shankar, Ehsaan and Loy have composed some really cool music in the album, which should be out soon.

Have you sung in the film?

Yes. It's 'kind of' the title track which I have given my vocals.

Is there anything else that you want to tell about Dil Dhadakne Do?

Yes. The fact that it's scheduled to release in June and that 'everyone must watch it'! (laughs).

Now, tell us something about Wazir?

I am really very happy with the response that the teaser of the film (Wazir) has got. As far as my role is concerned, I play an ATS officer in the film. Our characters (Amitabh Bachchan and me) are bound together by a certain grief of a loss of a loved one, which brings the two of us close together. And within that combined grief, how we end up finding some kind of redemption through each other's loss is what forms the crux of the film. Chess 'plays' a metaphor in the film.

Is Amitabh Bachchan wheel chair bound throughout the film?

Yes. He plays a handicap in the film.

What's more important to you: the film's script, your co-stars or the production company?

To start with, it's the script of course. What it is that you are going to be a part of is the most important thing. The rest of the factors like your costars etc... can only excite you further.

Is it true that you weren't a part of Wazir during its inception?

I don't really follow 'numbers'. But, unfortunately, if success has to be gauged only by these numbers, then, it becomes important. While I do feel that B-O figures are important, I also feel that there is success when you are being remembered as much as 50 years later! Let me give you an example: There was a great film that Yash (Chopra) uncle made called Lamhe, which didn't do well at the B-O. But, even today, whenever people look back at his life and talk of his best works, Lamhe definitely gets featured and spoken about. Isn't there success in that? Success to me is the combination of B-O figures and the film in totality. But, today, unfortunately, success is gauged on the basis of B-O figures only!

Can you once and for all clear the rumors about Alia's presence in Rock On 2?

Alia is not doing Rock On 2. But, there is a search going for a young actress for the part.

Dev Benegal is the person who can best answer this question. I have very clearly told him that I enjoyed the script very much and that I am ready whenever he is ready.

What's your next step wrt your MARD (Men Against Rape and Discrimination) initiative?

At this moment, we are looking to create a lot more content.

What's your take on the Censor's 'No Smoking' stand in the films?

I feel that we have a certification system that is relatively effective. That should be used more to deal with it, rather than forcing a mandatory law of putting a super/ title in the middle amidst a scene, which breaks the audiences' concentration from the film. I genuinely do not know of any person who has quit smoking after seeing that sign.

This year (2015) also marks 15 full years since the formation of Excel Entertainment and even that of Dil Chahta Hai. Any celebration plans?

It's going to be a very hectic year for all of us. There is not a nicer way to celebrate than to have a busy year!

Farhan, let's wrap this wonderful interview with some juicy 'Rapid Fire' questions:
Is it true that you were once dismissed from HR College in the second year of your Commerce degree?


True. For the lack of attendance.

Is friendship a driving force in your life?

Is it true that your first car was a Fiat, which was gifted to you by your father.

Yes, it was. The termed 'gifted' is like putting it too sweetly. Let's term it as the car was 'handed down' to me (smiles).

Yes. Rakeysh Omprakash Mehra wanted me to do a role which was eventually played by Sidharth. When the role was offered to me, I was not even thinking of acting in films.

Is it true that you are film maker Sajid Khan's cousin brother?

In an effort to prepare for your role as a loner introvert in Karthik Calling Karthik, had you isolated yourself at home and turned off your phone?

We all know your love for the popular band, 'The Beatles'. Did you always want to be the fifth Beatle?