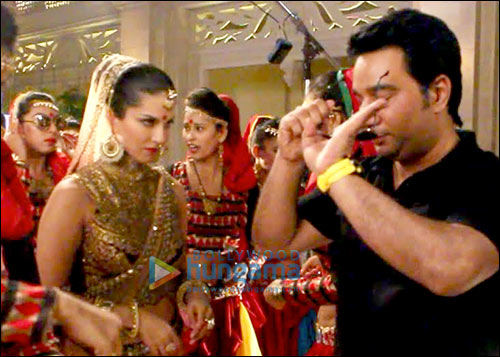 If you thought that the 'thalaiva' Rajinikanth was the only person who can swirl, twirl and still manage to wear his shades with utter perfection, then, that it's time for you to think again. Because, Rajinikanth is now all set to have competition from none other than ... hold your breath â€¦ Sunny Leone!

Well, Sunny Leone, who is a Rajinikanth fan, not only loves his acting, but also his dance and signature steps. Maybe that explains the reason as to why, in her forthcoming release Ek Paheli Leela; she will be seen doing this iconic step (of wearing his shades) in the song 'Saiyaan Superstar'. And the person who needs to be credited for teaching her this step is none other than choreographer Ahmed Khan, who is also the co-producer of Ek Paheli Leela.

A source associated to the film said, "It took Sunny little time to get it, and by the end of it, she was a pro in it. On sets, during breaks, she often imitated few signature steps and style of Rajinikanth". The source also added that, "While shooting for the song 'Saiyyan Superstar' on a helipad of Film City, Sunny Leone was casually discussing with Ahmed about her favorite Rajinikanth's signature style of wearing his shades. Ahmed, who was choreographing the song, actually decided to incorporate the step in the song. He spent a whole 30 minutes teaching Sunny the step. Sunny was so excited, that she continued wearing her shades in the same way even after pack up", the source concluded.