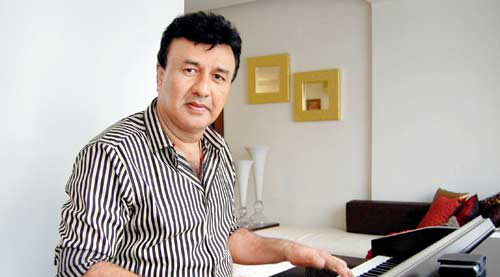 He's in the seventh heaven, attributing all the wonderful things that are happening to the blessings of Lord Ganesh and the support of his family. Says an emotional but confident Anu Malik, "I am a hero again - in the eyes of my wife Anjali, my daughters Anmol and Adaa! I am no longer considered a spent force. Dum Laga Ke Haisha started slow, had more people watching it on Monday than on the opening day, and has become a Tsunami. Every review has also heaped praise on my music."

His mobile rings. It is old comrade J.P. Dutta, who had once told him "Give me only those tunes you would hesitate to offer other filmmakers." Before Anu picks up this 'phone' (there are several during our meeting) he shows me the caller's flashing name delightedly.

I first met this huge composer in 1992, when his status was so down after over a decade in the profession that he had told me, "Neither my doorbell nor my phone bell rings!" But from the following year, the bells had never stopped ringing until 2005, with Anu notching up a Decade Honour award, three Filmfare trophies and a National Best Music award (for Refugee). That, we tell him, makes him the only composer, no, the only individual in Hindi cinema to have made two comebacks - 22 years apart!

Anu dismisses the compliment as irrelevant in the big picture. "I don't want to sound arrogant, but no one has really tapped me yet! J.P. Dutta, the films Kareeb or Munna Bhai MBBS - these are some cases that partly explored me. After Dum Laga Ke..., I now want to work with those passionate filmmakers who, like Adi (Aditya Chopra), give me izzat. I want to do complete films. Neeraj Vora came to me some months back and wanted me for Hera Pheri 3, originally my brand. I was hesitant because nowadays people want only one or two songs from us. But he told me, 'I want you to do the entire film.'"

How was this war won - of this level of critical and commercial glory after almost going into oblivion in movies? Above all, how and why did Aditya Chopra approach him?

"I think that the reason could be that I never stopped telling Adi that I would love to work with him and Yash Raj Films!" says Anu after some thought. "I would meet him (and Yash uncle) at YRF Studios, when I was shooting for the television show Entertainment Ke Liye Kuch Bhi Karega, and he had messaged me many years ago, 'We will work together when the time is right!'"

Meanwhile, Anu's career nosedived slowly but surely after a high like Main Hoon Na (2004), and after 2006, he barely got either entire films or A-grade setups. "When Umrao Jaan also flopped and I began to get just one song or two here and there, I realized that I had hit rock bottom!" says Anu.

And that is when he decided on a few things. "I junked any venom that might be inside me against filmmakers and actors for whom I had given so many hits but had dropped me, and I decided not to go into depression or give up, for that can really eat your insides! I had read stories of legendary composers like C. Ramachandra, Jai (Jaikishan) uncle, R.D. Burman and Laxmi-ji (Laxmikant) and great poets who had died horrific deaths after similar things had happened to them. I think that my education and my wife both saved me, and it hit me - one day - that my contemporaries were no longer around, and I was about to step into that zone myself! That was the day I decided to get back to my harmonium and keep making music, even when I had no work!"

Today, Anu is gratified when he hears of audiences throwing coins when his song 'Dard karaara' plays on screen. "I would say that Ganga Maiyya ka bhi aashirwad hai as the film was shot in Haridwar. The past is over, it's a new world with a fabulous lot of singers and composers and lyricists. And I will try and win the hearts of those who say 'today that they know a Chris Martin but do not know who Anu Malik is!'"

Every tale of victory and redemption has a turning point, and Anu's moment came one evening when he was driving (coincidentally) past Rishi Kapoor's house. "The phone buzzed with a simple message from Aditya Chopra, 'Meet me at office 6.30'. I rushed to YRF, and he told me that there was a subject for me, but that I would have to convince two young people: producer Maneesh Sharma and director Sharat Katariya."

The youngsters loved the fact that Anu came in with his harmonium that he always carries in his car. "Maneesh and Sharat told me that they had sat with so many composers who could not give them what they wanted. They had almost decided to make the film without songs when Adi told them, 'Try Anu Malik.'"

From here to meeting a 'soul-mate' in lyricist Varun Grover, and making songs like 'Sundar susheel' (the first tune Anu offered) and then the classic 'Moh moh ke dhaage' were like a series of mini-victories for the composer. "We brainstormed about every possible top singer for the two versions of this song, but I wanted to be true to myself and chose Papon, who many years ago after his show in Delhi, had told me, 'I would like to work with you!' though I had no work!"

Monali Thakur came in because Anu had promised her, in public during Indian Idol, that he would give her a song. "My songs have been born out of my hunger for a great opportunity, and I recognized that bhookh in these singers too. Papon hugged me after he heard the song, saying that it was ages since he had got such a heartfelt number, while Monali started weeping, and later told me that her ailing father, veteran Bengali musician Shakti Thakur, had declared that I had made her career!"

But the rewards of great work cannot come without an understanding of the sheer power of time. "When Kumar Sanu walked into my room for his song, both of us, who had ruled the '90s, were shivering! But then I fought that 'bataaoonga' (I will show them!) trait and channeled it into feeling, 'Main apne aap ko bataaoonga (I will prove what I am to myself)!"

Today, what Anu Malik is truly happy about is that he is again being discussed. "When Vidya Balan calls up to tell me, 'I simply love, love, love 'Moh moh ke dhaage' it is time to remember what my father Sardar Malik says (I always use the present tense for him, as for me he is still there): 'Anu can make a song at any time, in any place.' Because, at that time, God takes over."