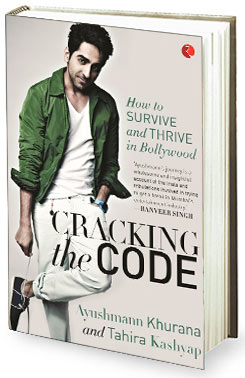 
Just when his Dum Laga Ke Haisha is doing great guns with excellent word of mouth, making sure that audience continue to trickle in for his light hearted unusual love story, Ayushmann Khurranna's book 'Cracking The Code' has hit the stands. Co-writing it with wife Tahira Kashyap, Ayushmann presents this 130 odd page mini-book as an autobiographical affair with the sole intent to demonstrate his journey into Bollywood as a complete outsider. In the process, he lets his readers - especially those who are trying to make it big in the industry - know of the kind of troubles and turbulence they can expect on stepping into Mumbai.

Sometimes funny, sometimes retrospective, sometimes serious and at times a little off-track, Cracking The Code attempts at establishing a few codes to remember while trying to make it big in the world of glitz and glamour. Of course, Ayushmann makes it quite clear right at the beginning that the book doesn't have to be taken as gospel's truth but mainly read as a guideline. In that aspect, the codes that he establishes chapter after chapter (there are 11 of those) are mostly standard, and at times even obvious. You know, the kind that go as 'Grab the Opportunity', 'Rise above the Rest', 'Respect the Critics', 'Go through the script before signing a film' etc. etc.

It is apparent that these aren't quite ground breaking codes and any sane individual who has been in the industry (any industry for that matter, and not just Bollywood) for even a little while would vouch for these codes. However, since Ayushmann says it all in quick time after joining Bollywood, one can pretty much sense that he is just baring his heart out, without trying to be too philosophical or literary about the practical scenarios that he details.

So, in this first person account, one does get to know about his childhood stories, his growing up years as a teenager, his first love story (which eventually culminated into marriage), and then his first brush with the world of glamour once he stepped into one of the first ever reality shows being made for Indian television.

In this chronological account, he makes a few revelations around how reality shows operate, how youngsters from small cities as well as major cosmopolitans react to the fame that awaits them, how he too got affected a few times by the promises surrounding him, how he too slipped on more than just a couple of occasions, how he realized that he had to strike a balance between his work and family, how there were temptations - some true, and some fake - threatening to throw him off the track a couple of times, and so on.

However, what is the most remarkable takeaway of the entire story is the code that sets the thought process of carrying on with whatever work that comes one's way, despite eyes being set on achieving the ultimate goal. It is wonderful to see the manner in which Ayushmann had quite a few interesting stints, be it with adventure reality shows to being a musician to stepping in as a RJ to making his foray into the world of VJing to a couple of other different streams, before being recognized by Shoojit Sircar to step into Vicky Donor as the leading man.

This is what makes Cracking The Code as a truly humane story as one realizes how it is so important to keep moving on in life and still pursue one's dreams, instead of sticking to just Plan A ad stay on to be a struggler forever. In that aspect, Ayushmann does tell an inspiring tale of a youngster who could be anyone from house next door.

Of course since he is a part of the glamour world now, he does have a few interesting tales to narrate around how he once got into a situation where those in charge of making a film of his belonged to the underworld, how he was linked with a glamorous co-participant of a reality show, how his own boss didn't have any trust or confidence in him to make it big in the world of movies, how he knew the fate of at least a couple of his films even before they hit the screens, and so on.

This open hearted account pretty much establishes that once Ayushmann sits down to write his detailed autobiography 30 years down the line, he would indeed have quite a few interesting stories to narrate.