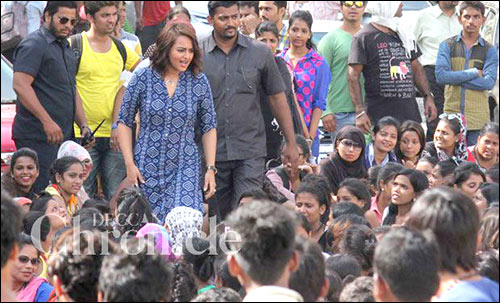 Sonakshi Sinha, who was last seen in Tevar, will be donning a different avatar for her upcoming film Akira, wherein, she will be playing a strong headed protagonist. While she has been undergoing extensive physical training to pull off this action packed role, Sonakshi has also started shooting for the film in the city, and that too on real locations.

Recently, Sonakshi Sinha was part of an intense protest scene in South Mumbai, for which she shot along with many college students for A R Murugadoss' directorial Akira. The scene in question turns into a dramatic sequence wherein the situation goes out of control and the police initiate a lathi charge.


If the picture is anything to go by, despite the chaos created by the authorities and tear gas being showered at her, Akira refuses to budge and she is seen sitting on the street, protesting for her voice to be heard.

Akira, produced by Fox Star Studios, also has Shatrughan Sinha in a cameo along with Anurag Kashyap playing a negative role.