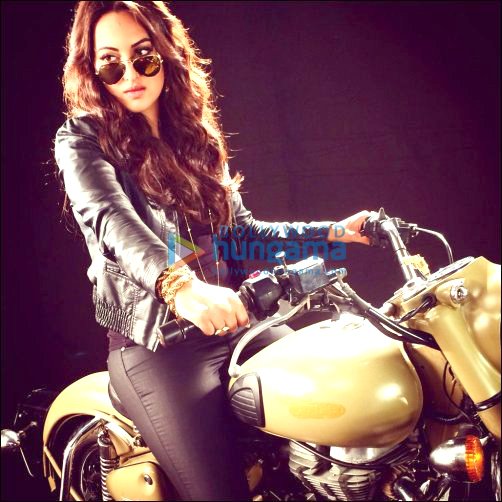 A while back we had reported that Sonakshi Sinha was all set to glam up rapper Yo Yo Hiney Singh's next album. Later it was about Sonakshi investing in an international Kabaddi team. Whatever be the case, the actress who is riding high on the success of her last release alongside Akshay Kumar, Holiday: A Soldier is Never Off Duty has been making headlines.


Though currently she is busy with her next film Tevar that features her with Arjun Kapoor, the actress seems to have taken time off for a photo shoot. Posting a picture of herself on a bike on twitter Sonakshi says, "Sona on sone ki bike". Dressed in a chic leather jacket, skinny jeans and aviator sunnies, Sonakshi pulls off the perfect biker chick look, astride India's version of the Harley Davidson, the Royal Enfield.


On the film front, apart from Tevar that is directed by Amit Sharma, Sonakshi has already begun work on Prabhu Dheva's next Action Jackson alongside Ajay Devgn.