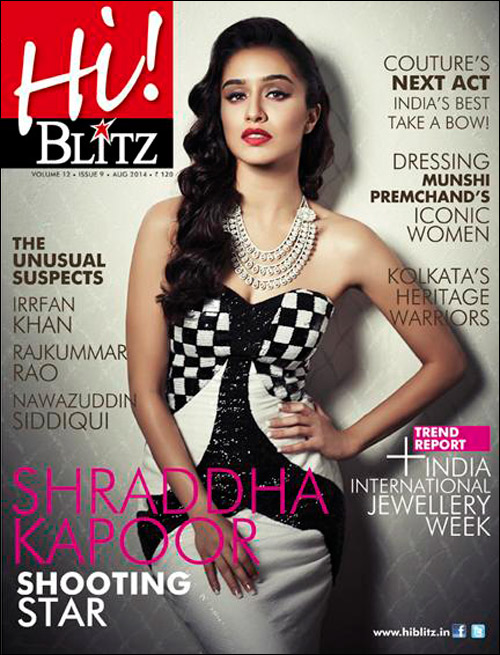 Her last Bollywood outing was the hit Ek Villain that featured Sidharth Malhotra and Riteish Deshmukh. With herW impressive performance in the Mohit Suri directed film, Shraddha Kapoor certainly caught the audiences as well as the critics attention. However it was her earlier film Aashiqui 2 that sealed the deal for Shraddha Kapoor, propelling her into the limelight. Now as she gears up for her next release the actress took time off to shoot for fashion magazine Hi! Blitz posing as their cover girl for the month of August.


Wearing a strapless sequin embellished gown by Deepa Goyal, with her hair styled in a retro wavy side swept look embellished with a gold necklace, Shraddha looks stunning. If that wasn't all the magazine also features an article on the actress complete with equally stunning images, titled, 'Shraddha Kapoor, Shooting Star'.


Apart from Shraddha Kapoor, the latest issue of the magazine also features pieces on Couture's next act, iconic women and Kolkata's heritage warriors plus a trend report on the Indian International Jewellery Week.

On film front, Shraddha Kapoor will next be seen alongside Shahid Kapoor in Vishal Bhardwaj's adaptation of Shakespeare's Hamlet, titled Haider.