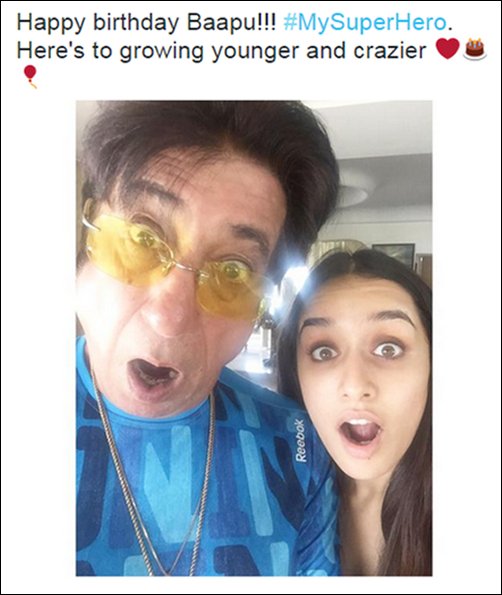 Readers may be aware that actress Shraddha Kapoor shares a strong bond with her father and veteran actor Shakti Kapoor. Despite a busy schedule, the actress recently took some time out for her family and celebrated Shakti Kapoor's 57th birthday.


In fact, Shraddha Kapoor took to Twitter to post a quirky picture with her father along with an interesting caption. Not many know that Shraddha Kapoor fondly calls her father 'Baapu'. As far as the celebrations were concerned, it seems to have been a family affair. Considering that Shraddha's mother Shivangi Kapoor recently lost her father, the Kapoors decided to keep it simple. We hear that Shraddha Kapoor crooned an emotional number from her upcoming film Rock On 2 for her father, while son and actor Siddhanth Kapoor too joined his sister. The family also enjoyed a sumptuous meal as their mother cooked her special mutton dish for them.

Shraddha Kapoor reveals what her most prized…