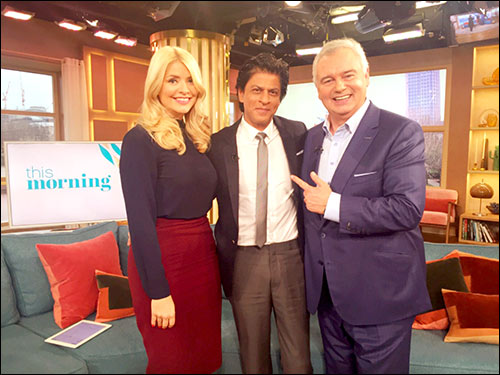 
And SRK charmed the pants of Holmes and his two female co-hosts. Holmes introduced SRK as the world's biggest star. Compliment graciously noted, SRK went on to field questions on the infamous 'Bollywood song-and-dance' formula.


When Holmes drew attention to the numerous marriage proposals that SRK had received through the show, SRK, ever-quick with the repartees said, "I am free on Friday."

SRK's on-screen Lakshman Varun Dhawan had also tagged along for Holmes' show. Varun even got teased about his overcoat which, SRK revealed, he insisted on wearing even indoors for the interview.


Ever the grand entertainer SRK won over all of Britain on the show by saying he owes his success to the UK and the US where his urban appeal it at its highest ebb.