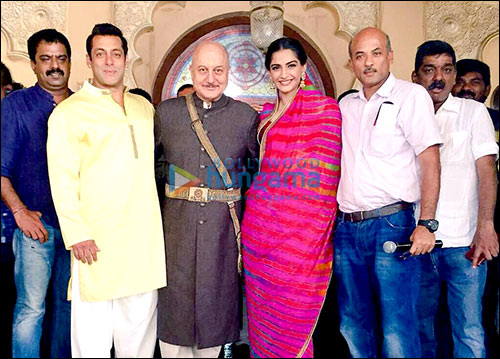 With Bajrangi Bhaijaan breaking records, Salman Khan gears up for yet another release for the year and it is for his mentor Sooraj Barjatya's film Prem Ratan Dhan Payo. The superstar, who plays a double role in this family drama, will be paired opposite Sonam Kapoor.

While there have many pictures from the sets of the film that have been doing the rounds since the day the film went on floor, here is an iconic moment that went viral on social networking sites. Salman Khan was seen posing with co-stars Sonam Kapoor and Anupam Kher along with the famous filmmaker Sooraj Barjatya on the sets of Prem Ratan Dhan Payo. Salman Khan will be seen in the role of a prince and a common man in the film. The onscreen character of the actor is also supposed to be an ardent fan of football. On the other hand, Sonam Kapoor is said to play the pretty princess.