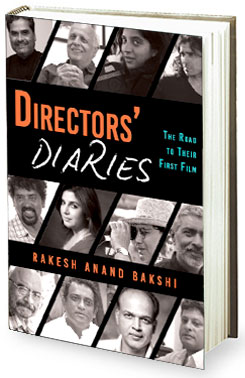 I was reasonably excited to catch hold of the book 'Director's Diaries - The Road to Their First Film'. It is always good to go through books on subjects that have not been explored before and since author Rakesh Anand Bakshi (son of legendary lyricist Anand Bakshi) promises to tell stories that have been hitherto untold, I was glad to pick on this 275 odd page book.

There was some apprehension though when I came across some of the usual directors that had been chosen by Rakesh. Mahesh Bhatt, Farah Khan, Zoya Akhtar, Govind Nihalani are some of the known names who have been interviewed in depth by many authors before with books dealing with similar agendas. I wondered what new would they have to tell now, considering the fact that so much has already been told about their life and times in last few years.

As it turned out, the apprehensions weren't misplaced as quite a few portions of the book ended up being quick-skip affairs as there were several places where the interviews turned out to be really boring. Though it was pretty much expected, that this would be a rather serious affair considering the fact that Rakesh wasn't interacting with the directors for reasons related to entertainment but instead education and enlightenment, I still believed that the kind of anecdotes and insider account shared by the filmmakers would make for an engaging read. This didn't quite turn out to be the case as a whole which did disappoint.

Not that there wasn't anything to take home. With directors like Subhash Ghai, Ashutosh Gowariker and Tigmanshu Dhulia opening up, it was nice to know about certain facets of their lives which were not quite revealed over the years. The time when they realized they wanted to be filmmakers, the time it took them to actually reach that point where they could begin calling the shots, the earlier disappointments, the sense of command that started developing over a period of time and the tips they had to share for newcomers in the business - all of this did throw in a pointer or two which could be considered as a take away.

Still, the structure of the book is such that it actually makes more sense for a true-blue student of cinema to actually go through every detail shared in these elaborate interviews with 12 directors (including Vishal Bhardwaj, Imtiaz Ali, Santosh Sivan, Prakash Jha and Anurag Basu). In his conversations with the directors, Rakesh has largely focused on the technical aspects of filmmaking, which involves camera placement, shot taking, editing and cinematography amongst others. Now that does work only for those who really want to get into the specifics of what happens behind the camera.

For a regular reader though, it is more about the trials, tribulations and joys that come with the world of films which is of more interest. In that aspect there is very little that the book has to offer. Moreover, even the anecdotes shared around the softer aspects, e.g. handling of star egos, self-realization of strengths and weaknesses etc. are pretty limited. Hence, you do get excited for a while, only to find pages and pages of technical details seeping back all over again.

Pick this one only if you carry good patience of going through intricate technical details of filmmaking.