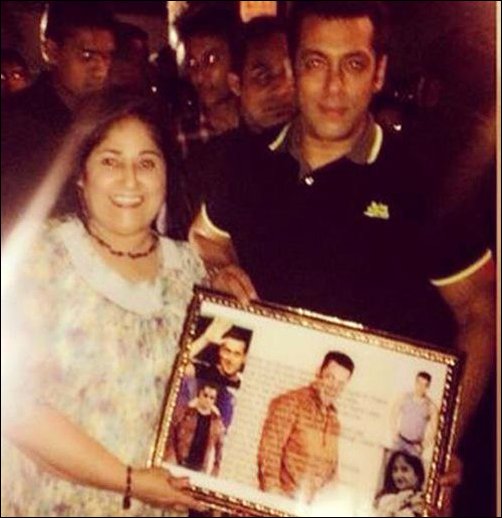 It is not just superstar Salman Khan who goes to any extent for the ones he loves, but it is his fans who too can go to any lengths to meet their idol. From gifting him paintings to collages, the actor has received many special gifts from them. Recently, he received another memorabilia from a fan outside the sets of 'Jhalak Dikhla Jaa'.


Salman Khan, who was recently at the celebrity dance reality show for promoting his production Hero with debutants Sooraj Pancholi and Athiya Shetty, was in for a surprise when a fan was waiting for him outside the sets of the show. The fan named Mrs. Madhuri was waiting with her son to present Salman Khan a poem that she had written for him years ago. The superstar not only was glad to see her love for him but even posed with her and the gift, which was collage of the actor's pictures along with a poem written for him.