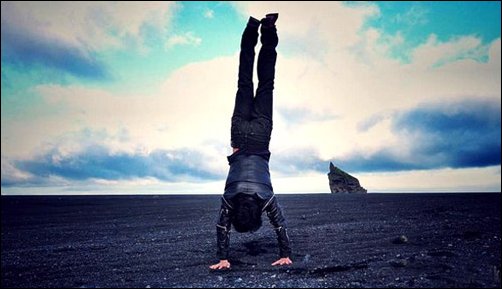 Despite the stardom and fame, he is one of the most hardworking superstars of Bollywood and his surgeries have never undermined his spirit to continue doing stunts.


Recently, renowned photographer Avinash Gowariker was left awestruck with the hand stand Shah Rukh Khan was seen doing while shooting for Dilwale at the Black Desert in Iceland. He posted an image of the same on his Instagram page and captioned it saying, "#ShahRukhKhan @iamsrk doing a hand stand in the Black Desert of Iceland! He just can't contain his energy!! Up for anything anytime! #Dilwale #LeicaM #LeicaTriElmar."


Directed and produced by Rohit Shetty along with Red Chillies Entertainment, Dilwale also stars Kajol, Kriti Sanon and Varun Dhawan in lead roles along with Vinod Khanna, Sanjay Mishra, Varun Sharma among others. The film is slated to release on December 18.