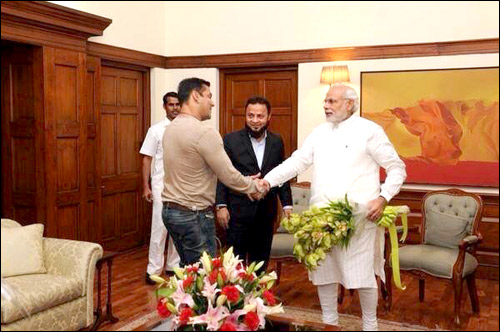 Superstar Salman Khan has been an ardent supporter of Narendra Modi even before the latter won the recent Lok Sabha Elections. Salman Khan and his father Salim Khan have openly stated their fondness for the current Prime Minister of India and recently, the actor even met Narendra Modi.

Recently Salim Khan had announced that his daughter Arpita Khan and her beau Aayush Sharma are planning to tie the knot on November 18, which will also marks the 50th anniversary of Salim and his first wife Salma. He also further expressed his desire to invite Narendra Modi for the occasion and we believe that it is for this wish, that Salman Khan visited the PM office, so that he can personally invite him for his sister's wedding. In fact, when Salman Khan entered the PM's office, Modi greeted the actor very warmly and the two soon got engaged into a conversation.

Also, just a few days ago, Narendra Modi had taken to Twitter to shower praises on Salman Khan who has been actively supporting the 'Swachh Bharat Abhyan'. Salman Khan was spotted at Karjat, trying to sweep the road with a broom as a part of encouraging the cleanliness drive campaign which was started by Modi to fulfill his dream of a clean India.