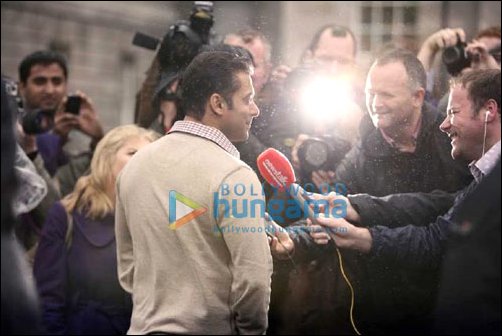 Salman Khan is busy shooting for YRF's Ek Tha Tiger with Katrina Kaif in Dublin. Ek Tha Tiger is a spy-thriller featuring the usual Bollywood elements of music and dance.

After going through numerous locations, director Kabir Khan decided to shoot his film in the University of Dublin. Trinity College's historic and picturesque campus will be used as a backdrop for the film, which includes a large open-air dance sequence in Parliament Square. This is the first time a Bollywood film is being shot in Trinity college of Dublin.

Salman took time off his busy schedule to interact with the Irish press, who were really excited that a Bollywood film is being shot in their country.

Posting this picture Kabir Khan tweeted, "Salman with the Irish press while shooting in the famous Trinity college of Dublin..."