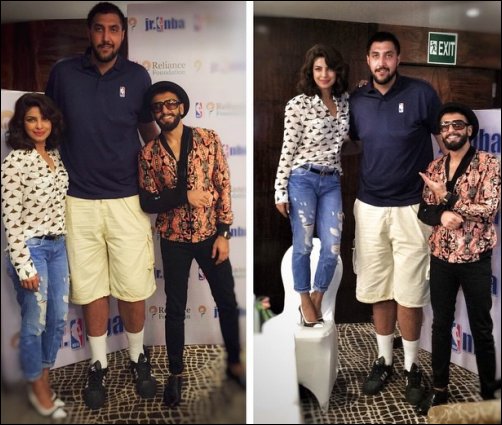 Ranveer Singh and Priyanka Chopra have come together again after Gunday. This time its for the upcoming Zoya Akhtar directorial Dil Dhadakne Do where the two play siblings. During the promotions of the film, Priyanka Chopra and Ranveer Singh came across the famous basketball player Gursimran Singh Bhullar aka Sim Bhullar who is the first NBA player of Indian origin when they visited the NBA event happening in Mumbai.


Priyanka Chopra was not only excited to see the sports star but even took to Instagram to share her fan girl moment. It was a collage of pictures wherein the first one had Priyanka Chopra and Ranveer Singh on each side of the sports star and the second one had the actress standing on a chair alongside Sim Bhullar to match his height, with Ranveer on the other side. The actress posted it saying, "At 7.5 ft, he's just a bit taller than we are! Look who we just bumped into... @simbhullar2 NBA's first player of Indian descent! @ranveersingh." Ranveer Singh too shared the second picture on his Twitter handle saying, "Bade Miyan toh Bade Miyan..Chhote Miyan SubhaanAllah!Gr8 meeting @SimBhullar2 with @priyankachopra (who is Chitting)".

However, it was not just the lead cast of Dil Dhadakne Do who got to rejoice the moment. Yet another celebrity who was in awe of Sim Bhullar was Abhishek Bachchan. This actor is currently active on many sports platforms considering his love for football, kabbadi among others. Abhishek Bachchan too took to Twitter to post a picture with Sim Bhullar wherein he said, "So I met this "little" guy today! He's gonna be a game changer for Basketball in India... Mark my words. @SimBhullaâ€¦"