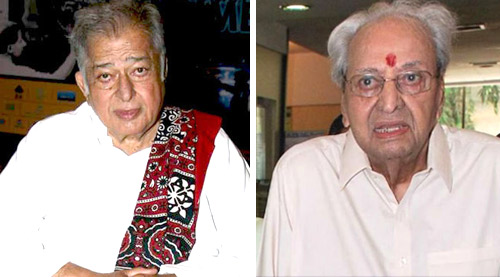 First Pran, now Shashi Kapoor. They've both been awarded the prestigious Dada Saheb Phalke Award by the government when they are too old and unwell to personally even attend the event.

Om Puri, who has received innumerable awards, feels it makes no sense for the government to give the award when the recipient is too old to enjoy it.

Reasons Om, "Why give recognition when the recipient is in no position to recognize anyone? This is what happened with Pran Saab when he got the Dada Saheb Phalke in 2013. They had to go to his home and give him the recognition. We could clearly see that Pran Saab had no idea what was happening. It is really sad."

Om thinks Shashi Kapoor is fortunately in good mental health. "He is able to enjoy his Dada Saheb Phalke. Unfortunately he couldn't fly to Delhi due to frail physical health. I remember Shashi's elder brother Raj Kapoor Saab was too unwell to attend the ceremony in Delhi when he was to receive the Dada Saheb Phalke award. He insisted on going nonetheless. At the function he was too ill to go up to the stage to get the award when his name was announced. The honourable President had to come down to Raj Saab's seat and give him the award. Raj Saab collapsed at the function and never recovered."

Om feels our icons need to be honoured long before the fag-end of their twilight years.
"In fact I'd say write their obituaries too in their lifetime. Let them know what the world feels about them."

A source very close to the National awards agrees with Om Puri. "Why only Pran Saab or Shashi Kapoor Saab? Even the Bharat Ratna was given to Atal Bihari Vajpayeeji way too late when he is no longer able to appreciate the recognition. Lataji and Sachin Tendulkar were fortunate to receive the Bharat Ratna in their prime."

However, Mahesh Bhatt feels such honours are, at the end of the day, of no consequence. "Any real artiste is enshrined in the hearts of the people. The State honours artistes to enlarge their own power- base. I wonder if anyone cares for these awards in this day age and time."