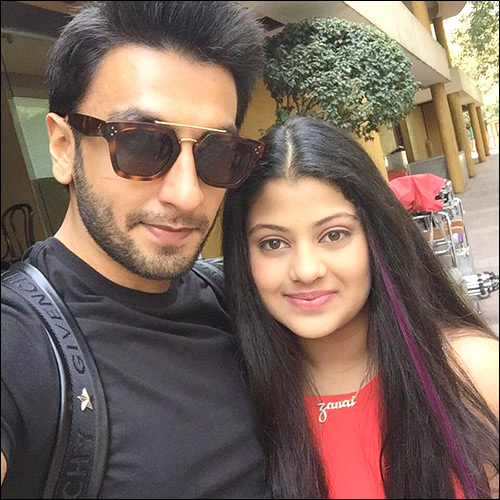 Ranveer Singh who returned to the city after a rather work-filled trip to Paris where he will be shooting for his next Befikre, met someone unexpectedly recently. The girl is none other than, the granddaughter of music legend Asha Bhonsle, Zanai.

Zanai, is Ashaâ€™s blue eyed girl and the veteran singer dreams of grooming her like her and her sister Lata Mangeshkar. When Asha Bhonsleâ€™s granddaughter met Ranveer Singh, Asha took to Twitter to post a picture of the actor along with Zanai saying, â€œGrand daughter Zanai with Bajirao post shooting her song video with '6 Pack Band'. Her next performance @WOMADelaideâ€. The legendary singer was all praises for Ranveer Singh and his acting abilities and expressed it on the micro-blogging site saying, â€œ@RanveerOfficial Meri poti Zanai aapke gun gaa rahi hai. Aap ache kalakar aur insaan hai. Shukriya. Aapki Asha.â€ Humbled by the same, actor Ranveer Singh too responded to Ashaâ€™s tweet saying, â€œAshaji shes a lovely girl! Warm, kind, beautiful & talented, just like her grandma! happy to have met her!â€

Ranveer Singh won several awards this year for his brilliant performance in Bajirao Mastani and will now be seen in the Aditya Chopra directorial Befikre opposite Vaani Kapoor.