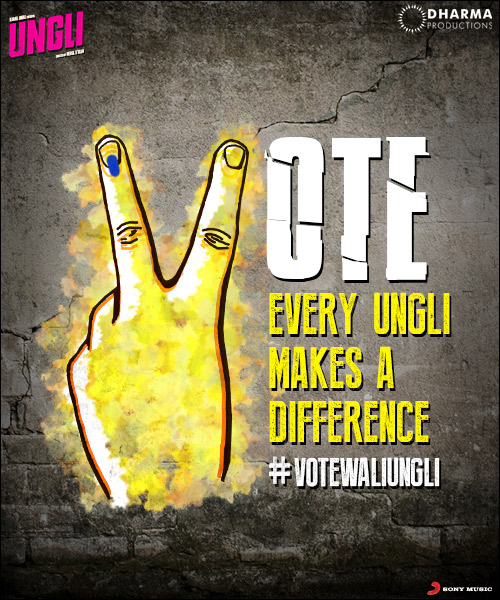 Filmmakers have been adapting unique promotional techniques to garner attention and Dharma Productions is doing the same for Ungli. The State Elections of Maharashtra will be held tomorrow and the team of the film has decided to use this opportunity in their favour.


The film which talks about fighting for your rights will be encouraging the public to vote by giving away pamphlets. The makers of Ungli will be distributing it in different localities of the city Mumbai urging people to vote. The idea behind this is that the team is asking the public to put your 'ungli' to some good use! Some of the areas where the pamphlets will be distributed tomorrow include Chiku wadi, I.C colony, U.B Nagar, Nancy colony, Ashok wan, Sai Baba Nagar in Borivali and in popular localities of Andheri which include 7 bungalows, 4 bungalows, Versova, Azad Nagar, Amboli. The plush locations of Juhu and Lokhandwala will also be included. Towards South Mumbai, Shivaji park, Hindu colony, Ghokle road, Bhawani Shankar road, Portugal church, Prabhadevi in Dadar too will see the team distributing pamphlets.