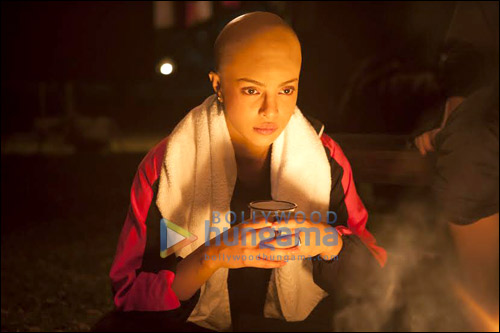 What's common to all of these ladies: Tanuja, Shabana Azmi, Nandita Das, Lisa Ray, Antara Mali and Shilpa Shetty? Well... beside the fact that all of them are Bollywood actresses, they all have gone bald for their roles in films.

The latest to join the 'bald wagon' is the national award winning actress Priyanka Chopra for her role in the upcoming film Mary Kom, which is a biopic on the five-time World Champion boxer. Her 'bald and the beautiful' look in the film is bound to shock many. But considering the requirement of her character in the film, and Priyanka Chopra's approach to any role, one becomes definitely sure that the bald scene in the film is definitely something to watch out for, although no one knows so far as to why her character in the film decides to go bald. Though it looks like Priyanka Chopra has used prosthetics to get the bald look, not many actresses have dared to flaunt such a look onscreen.

Speaking about the bald look, Priyanka Chopra said that, the bald look is a very authentic scene and she was really very excited for it. Considering that she is someone who will never say never, Priyanka took the bald look as a challenge, and the results are there for everyone to see.

Even though Priyanka is excited about the film, at the same time, she is equally nervous. The reason being that she has to show the film to the real Mary Kom in a few days! If that wasn't enough, then, Priyanka Chopra has even sung a lullaby in the film. Speaking about the lullaby at the time of the film's trailer launch, Priyanka Chopra said that the lullaby comes at an important part of the film, when there is a very intimate conversation between the mother and child. She added that the tune of the lullaby is really good and soothing.