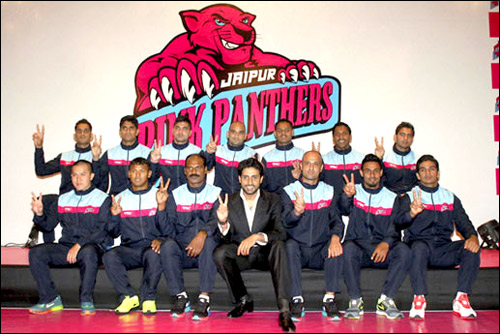 With entertainment and sports having so much of prominence in the country, the two not only go hand in hand but film celebrities are also getting involved in various sports that they are passionate about. While Shah Rukh Khan owns the IPL team Kolkata Knight Riders, John Abraham is investing in sports like hockey, bike racing and football and now, we have Abhishek Bachchan who recently announced his involvement with Kabaddi.

Abhishek Bachchan has bought a Rajasthani Kabaddi team called Jaipur Pink Panthers and the actor recently visited the city of Jaipur to supervise the preparations of his team for the upcoming Pro-Kabaddi league. While other actors have been promoting some popular sports, there is a reason behind why Abhishek Bachchan decided to dip his hands into Kabaddi. The actor says he has a childhood connection with the sport and that his father and legendary actor Amitabh Bachchan had introduced him to this game. Also, the actor continued to participate and play the game as a student in Delhi.

Despite his busy schedule, Abhishek Bachchan has been constantly tweeting about the game on his official handle and has been even sending out encouraging messages to his fans to support the game. On the Bollywood front, Abhishek is currently busy wrapping up the shoot of Farah Khan's Happy New Year as well as Umesh Shukla's All Is Well.