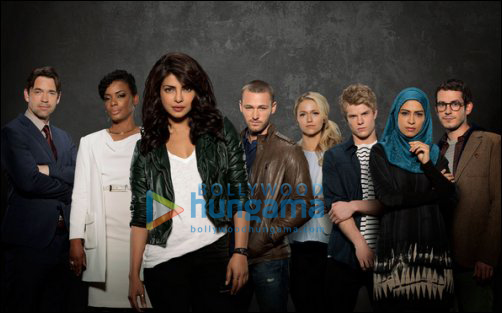 Juggling between her Bollywood projects, her new production house and American series, Priyanka Chopra is one busy woman. The actress, who is currently wrapping up her upcoming films in India and promoting Dil Dhadakne Do, recently flew to Los Angeles to complete the pilot episode of the ABC series 'Quantico'.


The actress who has often updated her fans about the happenings on the sets of 'Quantico' on Twitter, took to the micro blogging site to release the first poster of the series saying, "And it's happened #QuanticoABC will air this fall @ABCNetwork @anjulaacharia @tracybrennan007 @kcslee God Bless!yay!"


'Quantico', set against the backdrop of crime and suspense, has Priyanka Chopra playing the role of a FBI intern Alex Weaver who is sent with a group of recruits to Quantico for training. The series has the actress paired opposite popular actor Jake McLaughlin and is shot extensively in Virginia. The rest of the cast includes Aunjanue Ellis, Yasmine Al Massri, Dougray Scott, Tate Ellington, Graham Rogers, Johanna Braddy and Brian Smith.

Priyanka Chopra reveals how she avoided…