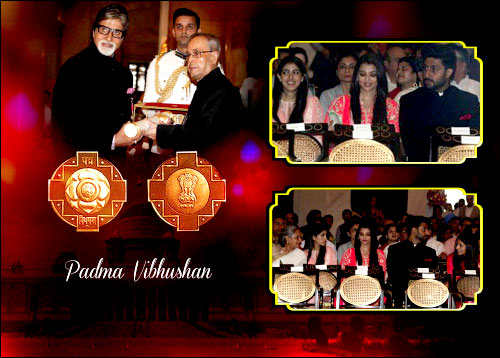 Amitabh Bachchan today is regarded as one of the leading stalwarts of Indian cinema, but it isn't just us who think so. In fact, recently, the veteran actor was awarded with the prestigious Padma Vibhushan by Pranab Mukherjee, the President of India.


Talking about the honour, Bachchan posted on his blog a detailed recreation of the prestigious event saying, "The family by my side â€¦ the hush in the ornate Hall of the Presidential Palace, Rashtrapati Bhavan â€¦ drum roles and the trumpets sound their pageantry .. from the main entrance of the arched columns an architectural wonder, the Presidents body guards walk in slow march to the seat by the front of the Buddha statue, the President in formal attire walks in between â€¦ all stand, he reaches his position, the National Anthem and greetings and we sit .. the first award is mine .. as per procedure I walk to the edge of the red carpet, turn to the President and bow .. walk up to him, climb the two steps to come up to the dignitary .. he greets me .. places the medal on the clip on my shoulder and chest position, gives me my scroll of honour, we turn to the media for a photo op., I turn right and walk back to my chair .. I am now a Padma Vibhushan .. !!"

Later, expressing his joy and gratitude on twitter he posted, "Honoured and humbled, the Padma Vibhushan! Words fail me to acknowledge the love and affection of the people that brought me here!"


The Padma Vibhushan is the second highest civilian award in the Republic of India, and consists of a medal and a citation and is awarded by the President of India.