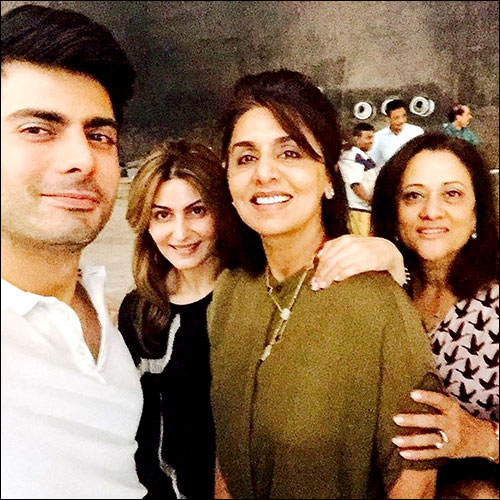 While it isn't surprising to see girls swooning over the adorable looks of Pakistani heartthrob Fawad Khan, the actor found a fan in former actress Neetu Kapoor. Neetu Kapoor recently shared a selfie with the actor on her Instagram page.

The picture also has Rishi and Neetu Kapoor's daughter Riddhima and the veteran star apparently bumped into Fawad on the sets of her husband Rishi Kapoor's upcoming film Kapoor & Sons. Talking about it, Neetu posted, "My Fan moment ?? on the set of Kapoor and Sons". Rishi, who will be seen as a 90 year old patriarch in the film, will have Fawad Khan playing the role of his grandson. Interestingly, Fawad Khan is also making a special appearance in Dharma Productions' upcoming love story Ae Dil Hai Mushkil which stars Rishi - Neetu's son and popular actor Ranbir Kapoor.

Besides Fawad, Kapoor & Sons also has Sidharth Malhotra and Alia Bhatt playing lead roles and is directed by Shakun Batra. The film is slated to release on March 18, 2016.