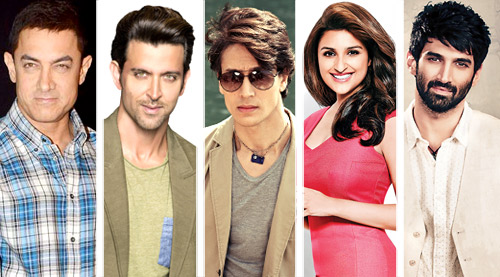 Undoubtedly, the year 2015 was filled with many surprises and it was definitely an eventful year for many celebrities. The much awaited Shah Rukh Khan - Salman Khan ka milap, Salman Khan's two blockbusters, the clash of two big films, the emergence of women-oriented films etc were some of the most memorable happenings this year. But there were some Bollywood actors whom we would have liked to see on screen as we really missed their presence.


Aamir Khan: Well, this Khan is always the last one to release a film but definitely sets new box office records every time his film hits the silver screen. However, the actor also takes his own time to prepare for a role he believes in to play it with conviction. And for his next titled Dangal, he has to undergo drastic physical training, since he will play the younger and older version of real life wrestler Mahavir Phogat and that isn't a cakewalk. Yet, it definitely would have been a sight worth a watch if a film of Aamir Khan would have added to the clash of Bajirao Mastani and Dilwale.


Hrithik Roshan: Hrithik Roshan is probably the only most successful superhero till date in Bollywood. While his Krrish series have created waves amongst kids, he is all set to don a rugged avatar in the upcoming period drama Mohenjo-Daro. Since the film underwent extensive research and is also a costume drama based on a lesser known era, Hrithik Roshan required a few months to prepare and had to sacrifice this year to completely give his all for the film. Mohenjo-Daro is still in the shooting stage and is slated to release on August 12, 2016. So we probably wouldn't get to see our Greek God until mid-2016.


Tiger Shroff: His debut film Heropanti, a quintessential masala potboiler fetched him several awards. While soon he signed two films back-to-back with Sabbir Khan and Remo D'Souza, the films probably took more time to go on floors due to the directors' busy schedule. He will now be seen with Shraddha Kapoor in Baaghi and then with Jacqueline Fernandez in A Flying Jatt, where he will be playing the role of a superhero.


Parineeti Chopra: She received a National Award for her performance in her second film, Ishaqzaade. However, the actress hasn't signed a single film after her last with Ranveer Singh Kill/Dil in 2014 which failed to live up to expectations. But 2015 definitely hasn't been uneventful for her. Though not for her films, the actress underwent a major image makeover. Parineeti, who was often criticized for being overweight according to Bollywood standards transformed into one of the sexiest ladies and was seen in a rather slim avatar for a photoshoot recently. Let's hope we get to see her magic soon on the silver screen too!


Aditya Roy Kapur: Though Aditya Roy Kapur has made several guest appearances or has played supporting roles in many Bollywood films, Aashiqui 2 and Yeh Jawaani Hai Deewani established him as one of the most sought after actors in Bollywood. However, the actor remained absent throughout the year, rarely making an appearance in public events because he was busy shooting Fitoor. The film too had to undergo several delays, especially after Rekha decided to quit the film after shooting for a few portions. But now that the film is back on track, Aditya is one of those actors, who will have one of the first releases in 2016.