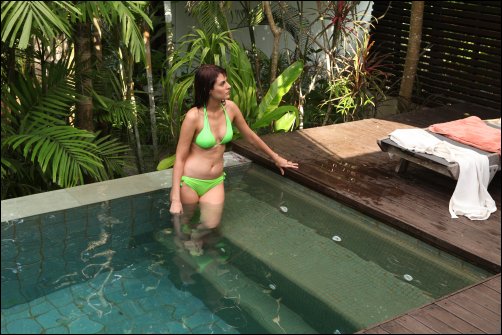 After her cameo in Roy, Iranian model turned actress Mandana Karimi will soon be making her full-fledged Bollywood debut as an actress.

Though the pretty girl has little understanding of the workings of the industry, she is a big fan of Bollywood films, and will be making her debut alongside Kunal Khemu in Bhaag Johnny that is slated to release on September 25. However, what caught our attention was her bikini shoot from the film. Though this will not be her first time sporting a swimsuit, Mandana ups the hotness quotient with panache. Incidentally her first shot while shooting for the film, was the bikini scene.

Back on the film front, apart from Bhaag Johnny, Mandana Karimi will also be seen in the upcomingKyaa Kool Hain Hum 3.