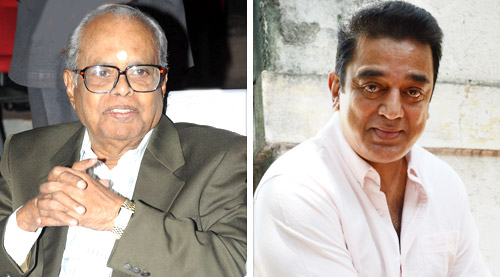 K Balachander, quite easily the doyen among Tamil filmmakers, is critically ill.


His protege Kamal Haasan says, "Balachander Saab is my guru,mentor and guide. I am an actor because he made me one.He is stable as of now but critical say doctors. I am in LA sound mixing for Uttama Villain."


Kamal Haasan started his career asa clapper boy on Balachander's sets and grew into Tamil cinema's most formidable actor under the director's tutelage. Balachander was instrumental in grooming both the Tamil superstars Kamal Haasan and Rajinikanth.


Says Kamal Haasan emotionally, "Our bond goes far beyond the usual director-actor relationship. We are guru and shishya. A lot of whatI've learnt about filmmaking comes from Balachander Saab. He's a towering institution for all of us."


Ironically, Kamal Haasan who played a clapper boy in a song featuring Dharmendra and Neetu Singh, played the star-actor Kamal Haasan in K. Balachander's Paarthale Paravasam. Recalls the actor, "When Balachander Sir visited me on the sets of Abhay in Chennai one day everyone in my crew was agog.Why had the master come to the pupil? The minute he asked me to make a guest appearance in hishundredth film I said yes happily. How could I not be part of such a historic event in the life of a person who means so much to me?"


Continues Kamal Haasan, "I played myself in the film. But it was a very comic sequence where in a public gathering my topi flies off."


The actorbecomes sentimental about his mentor. "The best roles and opportunities in my careercame from Mr Balachander. I've done about35 films with him.In his 100th film featuring Madhavan I did a guest role. He said I must be in his 100th film. There was no questionof refusing him. For himIwas ready to break my rule of the last ten years of doing only one film at a time. There are no rules for Balachanderji."