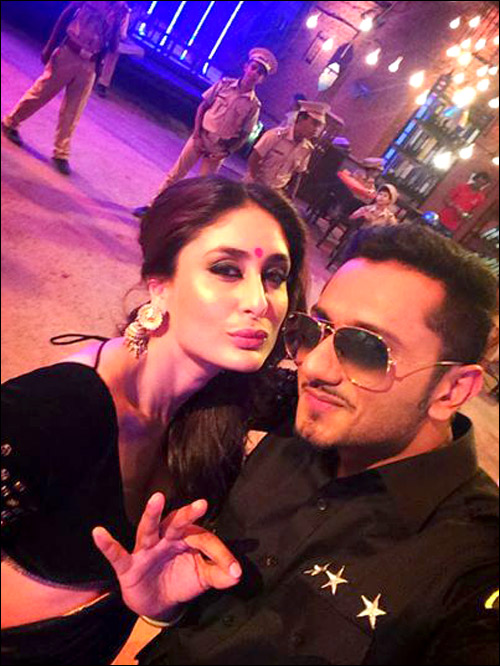 Earlier we had reported that director Rohit Shetty and rapper, music composer Yo Yo Honey Singh are all set to revive the 'Lungi Dance' magic with the filmmaker's next Singham Returns. And just recently, Honey Singh was seen posing with Kareena Kapoor during the shoot of this promotional song.

Apparently, Honey Singh has shot for the song, along with Ajay Devgn and Kareena Kapoor, where he will be mouthing the line 'Aata Maja Satakli', the famous dialogue of Bajirao Singham from the prequel.

The video of the song will feature Ajay Devgn in his cop avatar while Kareena Kapoor, who is playing a Marathi mulgi in the film, will be seen sporting a black navari and ethnic jhumkas. Apparently, around 100 kids will be seen dancing in the peppy number, along with the stars, which is choreographed by ace dancer Ganesh Acharya.

Yo Yo Honey Singh, who is pretty active on the social networking sites, recently posted a picture with actress Kareena Kapoor with whom he has been shooting for the first time. Talking about the picture, he posted on his Facebook wall saying, "BeBo Diyan Gallan Pink Pink
YoYo with Miss Gorgeous."

Directed by Rohit Shetty, Singham Returns also features Amole Gupte and Anupam Kher in prominent roles and is slated to release on August 15. While this sequel deals with black marketing business, the prequel Singham starred Prakash Raj as a corrupt politician.