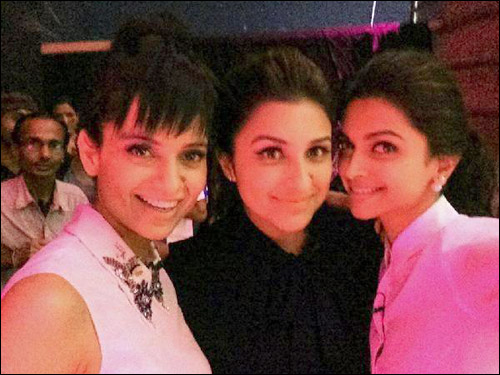 Contemporary Bollywood actresses are all set to defy the popular adage 'actresses can't be friends'. Though they made their debut in different genres of films, Kangna Ranaut, Parineeti Chopra and Deepika Padukone undoubtedly are actresses who are appreciated for their acting skills and beyond. These three actresses were captured in a picture perfect moment recently.

In what we would call a rather co-ordinated colour combination, Kangna and Deepika in white and Parineeti in black, were seen bonding together on the set of the show Satyamev Jayate at Yash Raj studios. Satyamev Jayate invites common people who have been victims of various injustice in order to share their experience with the audiences and focuses on bringing about a social change in the country. However, we hear that the new season of this show will also have a celebrity backing up the issue in each episode.

Hosted by Aamir Khan, Satyamev Jayate has been divided into three slots this year, while one has already gone air in March and the second slot is currently being shot. The show has previously dealt with topics like domestic violence, rape, Indian police system among others.

After the massive success of the first season, the second season of Satyamev Jayate is aired on Star channels along with all Doordarshan channels, so that even the rural areas of the country can have access to the show. The show will go on air in September.