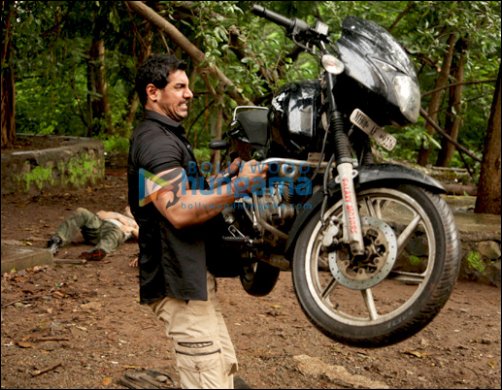 John Abraham's biker's streak has taken a new turn. The actor, who is known for his love for bikes and riding some of the fanciest bikes, will be now seen doing something else with them. Recently, while shooting for his latest action film Force, John did one of the most difficult action sequences.

For one of the action scenes in the film, John had to pick up a huge bike and throw it. What is interesting is that Johnny boy decided to do it all by himself without using any safety measures or harness cables.

The Pulsar bike, which gets to face John's wrath in the film, weighs approx.150 kgs and one definitely needed a lot of force and energy to pick up such a heavy bike without any help. John Abraham has been working out a lot for his role in Force and has developed an incredible body. Since most of the action sequences are more physical than just involving guns and gadgets, John decided to try out the stunt without any strings/ cable attached to it and much to everyone's surprise on the sets, he pulled it off excellently. It took him a few takes and a lot of effort to pull of such a heavy stunt.

Rakul Preet Singh has a heartwarming…